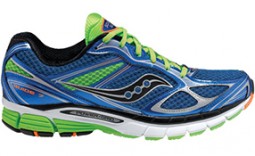 What does Saucony actually mean or and how do you actually pronounce it? I feel like I get this question all the time. The name of the company is a Native American term, which means “mouth of a creek or river”. The Saucony Creek runs through Kutztown, Pennsylvania, Saucony’s first shoe factory was built along its banks.  Saucony was purchased by a small shoe store called A.R. Hyde & Son’s which bought the rights to Saucony in 1968. Believe it or not, Hyde & Sons made the first space boots worn by the first American astronaut to walk in space.

My first introduction into Saucony running shoes was high school cross country, this is where serious running all started for me.  My first pair of running shoes was a pair of hand me down Saucony’s from my older brother, I really wish I could remember the model.  Who knew 10 years later that running would be such a big part of my life.

After graduating college I was still running and needed to purchase a pair of new running shoes. An old college cross-country teammate told me I should try the new Saucony Guide 3.  Five years later and the Guide series is still a style that I rotate in my lineup of running shoes.

Let’s talk specs: Saucony states that the women’s model weighs 8.6 oz and the men’s model at 10 oz, both with a heel to toe drop of 8 mm.  As with most of the Saucony updates they continue to switch all models from ProGrid to PowerGrid, the PowerGrid material is 33% lighter than ProGrid and a lot softer.  A few years ago Saucony took a bold move with their shoes and moved most of their running specialty models from 12mm heel to toe drop to 8mm. I feel like this was a good choice and has helped make Saucony one of the fastest growing shoe manufacturers in 2014. There has been direct research done to show that shoes with a lower heel to toe offset promote more of a mid-foot strike that can help reduce injury if practiced correctly over time.

The Guide 7 offers a broader forefoot platform that gives the runner more support through mid-stance and toe off. In past Guide models they’ve seemed to not be flexible in the upper forefoot. Most of my running with this shoe has primarily been soft flat trail running and flat road running. If you like the majority of the cushion to be in the ball of your shoes you will definitely like what Saucony has done with the Guide 7.

To me this shoe is classified as an everyday trainer that works well for everyday running. The Guide 7 is perfect for running between 10-60 miles a week. Keep in mind that shoes are like tires on a vehicle, they might look good from the outside but the internal structure is usually compromised between350-500 miles. Everybody handles stress on the body differently so it’s very important to listen to your body, it will tell you when you need new shoes.

The Guide 7 is a slightly posted shoe meaning that it has a wedge in the midsole that’s stiffer than the rest of the shoe. The stability in the shoe helps slow the rate of pronation.  One thing to note is that pronation is a normal thing and happens with almost everyone’s foot on impact.  The Guide 7 offers mild stability for the runner who has excessive pronation through the heel to toe transition stage. It will accommodate neutral runners too. As your distance increases for your longer runs your stride breaks down and pronation occurs more often.

Another feature of the Guide 7 that I like is how it fits around the upper part of the foot.  It offers a comfort lite sock liner, which is contoured to cradle the heel, support the arch and reduce peak pressures in the forefoot.  The lining is Saucony’s HydraMax material that combines superior moisture wicking proprieties with a plush feel for comfort. www.sauconyrunning.com

As stated by Saucony, the Guide 7 represents the longest development initiative in Saucony’s history. They’ve spent more time developing this shoe than any other model in their lineup. If you’re looking for your next shoe and you’re a little unsure about what to try, I suggest giving the Saucony Guide 7 a shot.