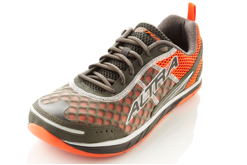 A relative newcomer to running shoe manufacturing is a Utah-based company named Altra.  While new to having its own line of shoes, the family that started Altra has been in the specialty running store business for decades.  Their claim to fame prior to Altra was modifying traditional running shoes to have ‘zero-drop’ or no extra heel height.  The heel height was made to be the same as the forefoot.  In theory, they were making minimalist shoes long before the big shoe companies.  The family decided to go all-in and take the leap to having their own shoe line.  Altra Zero Drop Footwear was born.

The Altras are unique in a couple of ways.  First, they are truly flat, with the heel being the same height as the forefoot.  Many other companies have jumped on the minimalist bandwagon over the past couple of years but only take it so far with most minimalist offerings still having a heel height of 4mm over the forefoot.  In contrast, a traditional running shoe has a heel height of 12mm over forefoot height.  Second, the Altras have a foot-shaped toe box.  Take a minute and set your current running shoe on the ground and put your bare foot next to it.  Chances are you will see they are two very different shapes.  Your foot is broad and wide across the ball of the foot and toes while your shoe is narrow, tapered, and pointed.  The foot-shaped toe box gives your toes a chance to spread out or splay which is conducive to healthier running

My story as it relates to this review starts with suffering from a serious case of plantar fasciitis for close to four years.  I tried every conservative method to get rid of it from not running (hated that), nonstop stretching, massage, physical therapy, night splints, custom orthotics, over-the-counter orthotics, cortisone shots, and shock wave therapy.  It became life-consuming and expensive and none of it worked.  One day a light went on and I realized about the only time my feet didn’t hurt was when I was barefoot.  I got myself some barefoot shoes like FiveFingers and Merrells and what do you know, in a couple of weeks my PF finally started to go away.  I, and a lot of current thought in the industry, attribute this to letting my foot and lower leg stretch and strengthen by having LESS shoe and not MORE shoe.  A couple months later, the PF was gone.  I was a zero-drop, minimalist convert.  The downside of the minimalist shoes available at the time was they were not necessarily the easiest to run in for a guy a couple decades past his prime.  Those barefoot shoes are just barely more than being truly barefoot.  Who would have thought?  A couple of the big shoe companies came out with lower heel (4mm) minimalist running shoes that worked well for me from a heel height perspective and offered more cushioning but still had that narrow pointy toe box.  These toe boxes had a fit I was familiar with but were not particularly comfortable on my foot.

Then one day I had the opportunity to try on a pair of Altra Instincts (the women’s version is called the Intuition).  The clouds parted, the sun came out, and there very well may have been rainbows.  I had never had a pair of shoes on that were anything like it.  It had the flat profile I had come to rely on AND it provided plenty of room for my toes to spread out like they are supposed to and be comfortable.  The perceived looseness of the fit compared to other running shoes goes away after a couple runs.  I am currently on my third pair of Altra Instincts and don’t know how I ever ran without them.  If they ever change them in the future, I may have to retain a lawyer.

As I mentioned in a previous review of a barefoot shoe, it may take a while to acclimate to the differences between your traditional trainer and the Altra due to the difference in heel height.  Your calf and Achilles may feel a little sore for the first couple of weeks after the change.  A good transition program can be found at www.altrarunning.com and on the inside of the Altra shoebox.

Check them out when you have a chance.  They are probably not for everyone, but no shoe is.  You might be pleasantly surprised.

Jeff Freer was the Shoe + Store Manager at Inside-Out Sports in Cary.  He likes to run and ride when his wife and kids allow it.  He does not like to swim but does it anyway.