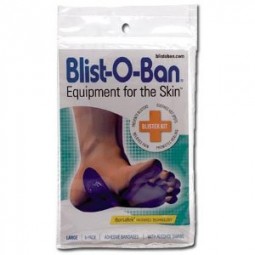 Anyone who runs regularly will get a blister at some point or another. Maybe it will be after getting new shoes, rigid orthotics, racing flats, or going sockless for the first time in a triathlon. Although I have had my share of blisters in my 22 years of racing,  I must admit that in the last few years, due to better sock technology, experience with different shoes and a little Vaseline here and there, that has not been a problem for me.  However, last year after I had foot surgery on my left foot, the doctor recommended using wider shoes for a while. The additional width accommodated the foot that was operated on but created a persistent blister on my other foot. The extra upper material from the EE width of the shoe would fold downward causing a seam to rub against the sock and my second toe. Since I was training for IM Florida, taking days off from running was out of the question. The blister seemed to heal periodically but the skin would break again during the next long run. I tried different shoes but ran into the same issue. Eventually, race day approached and the blister was still red, swollen and sore. Not only did I have a marathon to run, but that would follow the 2.4 mile swim and  the 112 mile bike ride.

Blist-O-Ban® is one of those products that we have been quietly selling at the store and at the expos for a couple of years. Although I had never paid much attention to it until now, sales reports show that it is popular among customers. Developed by Sam Medical Products, it is described as “equipment for the skin” and is available in three different sizes, small, medium and large.

The crux to the Blist-O-Ban® success is the patented BursaTek dome, a thin yet strong, slightly loose bubble or cover designed to encapsulate the actual blister. This non adhesive pouch actually looks like a blister itself, but it gently deflects friction in other directions. The bandage unit behaves much like a band-aid, with a strong adhesive on the areas around the BursaTek dome and paper backs that peels off before application. The material is very thin, pliable and water resistant. It comes with an alcohol pad designed to clean the skin prior to applying the bandage. The application process is conceptually simple but not as easy as it looks. The thin material folds easily and the strong adhesive will quickly stick to itself, rendering it completely unusable. I ruined a couple bandages before getting two in the right position on and around my toe. Luckily a pack has 6 bandages. However, once applied successfully, it sticks well, protects the sore spot and does not add unnecessary bulk.

With few other options available, I decided to try the Blist-O-Ban® bandage at the IM race (my back up plan were extra socks in the special needs bag and globs of Vaseline). I applied the two units around the toe early in the morning (before the swim) and hoped for the best. The result was unbelievable. Not only did my blister not bother me at all during the race, but when I took the socks and running shoes off 10 hours later, the bandages were still in place. Too bad my nutrition didn’t work so well.

As you can see, I used this product more out of necessity than choice but felt compelled to review it because it worked so well. I like reviewing $5000 bikes and $100 carbon bottle cage holders but there are other products out there, like the Blist-O-Ban®, that deal with mundane and annoying problems that definitely deserve attention. For less than $10, I was able to deal with a potentially debilitating issue at an important race.