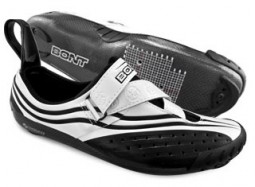 As I mentioned in previous reviews of bike shoes, finding the right fit is not easy. Unlike running shoes, more room is not always better. However, there is nothing worse when cycling than the dull pain of numbing toes caused by shoes that are a little on the tight side. This is further aggravated by the fact that our feet expand in hot weather and after hours of riding. It is not surprising then, that so much research and technology is focused on bike shoes. It is also not surprising that, nowadays, it is common to find shoes that cost well north of $400. Along with different upper and sole materials and different fastening systems, the option of offering fully customized shoes continues to be explored. Rocket 7 was successful in making very lightweight, stiff and comfortable shoes for a few years, using orthotic like molds taken from customer’s feet, to independently manufacture each shoe. Unfortunately, they are no longer around. Shimano has been offering some of their high end models with the custom option, where the upper of the shoe is “baked” in a special Shimano oven for a few minutes and then molded in an air vacuum, created by a unique Shimano air pump sucking the air out of a specially designed bag.  Bont, out of Australia, is the first manufacturer to offer a bike shoe where not only the sole is fully moldable but this can be done by the customer in the comfort of their own kitchen.

Bont was founded in 1975 as an innovative manufacturer of speed skates that were reinforced with fiber glass in the heel for additional support. In 1988, they started working with Carbon and in 2007 made their first pair of cycling shoes. In the 2008 Olympics, cyclists wearing Bont shoes supposedly won 8 gold medals.  In 2009, they expanded into the US market.

The Sub-8 is the flagship shoe in their triathlon line. With a sole made of 100% carbon fiber, it is impressively light at only 225 grams (as opposed to 550 grams for the Shimano TR 71). The super stiff, heat moldable sole includes a slim stack height of only 3.6 mm and a large grid in the forefoot to make it easy to align the cleats.  The upper is classic, fast-transition triathlon style, with a split tongue for easy foot entry and a one Velcro strap fastening system. A large heel loop for the rider to grab is molded into a unique and cleverly designed shoe horn that further facilitates foot entry.

I tried the Bont Sub-8 at first without molding it. I found it to be quite wide in the forefoot and had kind of an industrial feel to it (hard) however, it was stiff and light as advertised. Although it did not have that “fit like a glove” feeling, I could feel the power generated with each pedal stroke. Since my foot was still moving around too much due to the extra width in the forefoot, I tried it with my custom orthotics. That improved the fit quite a bit by reducing the sloppiness. It also got rid of some of the slight irregularities in the forefoot, since the insoles that came with these shoes were too thin and flimsy to absorb the raised ridges created by the cleat holes. Overall though, I felt that the shoes showed potential.

I then tried the molding process. Bont recommends that the shoe is “baked” in an oven at 160 degree Fahrenheit for 15 minutes. The lowest that the oven in my kitchen would go to was 170 degree. I tried it anyway. After 15 minutes, I took them out of the oven and tried to mold the sole. Although they were very hot, they were still extremely stiff and unmoldable. I put them back in the oven for 5 more minutes and tried again…same result. Afraid to go further, I stopped and decided to call my rep the next day. My rep told me to repeat the process and look for tackiness on the sole as a sign of when it would be ready to mold.  The next day I left it in the oven for 20 minutes and tried again. I think I got some molding but it was still very hard and not tacky (sticky) at all. I put it back in the over for 5 more minutes immediately and tried again.  At this time I was able to mold it. However, it was not as easy as it sounded nor as I expected. I mainly wanted to make the heel and forefoot a little narrower. I accidentally made the heel a lot narrower (to the point that I no longer could slide my orthotics in), while the forefoot still did not bulge. So then I stuck the shoes in the oven yet again, to open up the heel a bit. The final result was a decent mold for my foot but still a little wide in the forefoot. I have to say that the experience was somewhat frustrating.  And it certainly took longer and more tries than I anticipated.

I talked to guys who were distributing Bont shoes in the US and they said that ovens are not as accurate as they would like them to be, so the time required to get them to the right stage will vary. I also had a chance to ride with one of the guys in the Cervelo Test Team who was wearing Bont shoes so I asked him about his experience. He said he left his shoes in the oven for at least 30 and possibly 40 minutes before molding them. Maybe it’s just me but if I paid $400 for a pair of shoes, I would expect a little less variance in oven time than 15 minutes one way or another. Perhaps they could have a thermometer pop out of the shoe like a Thanksgiving Turkey when the shoe is ready to come out! Sounds silly but it would have been quite useful in my experience. I also found the actual molding a little awkward to perform. I’m not sure what I expected but maybe I should have known it was going to take some effort when they mentioned on their website that using the back of a screw driver can be helpful in the molding process.

The upper itself felt a little on the stiff side but that’s due to its “one piece” design, where the carbon sole is basically molded around the liner, before receiving the final upper. That was not a problem for me as I started to get used to it after the 2nd ride.  I did however, have an issue with the one strap closure. I give them credit for trying to use just one strap to cross the upper part of the foot three times in opposite directions for a snug fit. The problem though, is that the angle of the first bend is too sharp for the strap to slide freely. The end result is that only the second and third crossovers offer any slide to tighten the shoe. The first crossover sits loosely in the same position as it was when the shoe was open. In order to solve this problem I either had to pull each part separately, eliminating the reason for one strap, or I had to pre close the first part as tight as possible, making it practically unnecessary.

I really like the concept of a fully moldable shoe, and one that can be done at home and where the process may repeated as many times as necessary (unlike the Shimano TR 71s which can only be molded twice in the life of the shoe). Nevertheless, I feel as though the Bont Sub-8s are not completely ready for prime time yet. The timing, or at least the explanation of the molding process needs to be refined and the upper (at least in this shoe) can benefit from a few slight modifications. Unless you get a good fit right off the bat, I would not spend the money on this version but I am certainly curious to see what will come in the future.