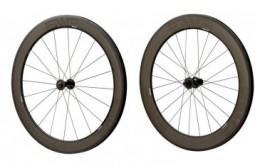 In the last decade, there have been a number of manufacturers who have tried to compete with Zipp, with little or no success. Blackwell and Mad Fiber tried it before eventually shutting down production. Others like Beyond Fabrication and Karbon Speed initially showed moderate gains in popularity but have since faded. Bontrager and Roval are still mostly seen in bikes of their parent companies, Trek and Specialized respectively. Even established players like Mavic, Hed and Lightweight Wheels have had a hard time competing with the Speed Weaponry Machine (Zipp) in the $2000-$3400 (per pair) carbon wheel range, being forced to focus on other wheel categories or to take more of a niche approach. Enve, though, seems to be making significant inroads where many others have failed. Measured  by sales, consumer demand, expert opinions or just plain general buzz and the rise of Enve’s stock in the industry is unmistakable. Founded in 2005 by Jason Schiers, who had stints in Lew and Reynolds and experience with other businesses that used carbon fiber in manufacturing, Enve Composites is now widely considered one of the premier manufacturers of carbon tubes, components and wheels in the country and probably the world.

The literal definition of Enve appears on their website as sort of a company motto: the burning desire to get to or create a perfect solution. While acknowledging that a perfect solution is beyond reach, it is very clear from their message that their philosophy is to produce products of the highest quality and performance standards. Most of the engineers and managers have had extensive experience in bike companies with substantial carbon experience or in companies in other industries that deal with carbon manufacturing. They heavily stress their passion for cycling and the quest for product excellence. It is inspiring for sure, but is it all marketing? In my opinion, the answer is no. These wheels are fast and durable, and they look quite good as well.

When it comes to carbon wheels, the first question that comes to mind is how aero are they (especially for a triathlete like me). Enve approaches wheel aerodynamics in real world terms. They test their prototypes in the Mercedes F1 wind tunnel on various different bikes with mannequin riders (not as just wheels). They develop their ideal rim shape taking into consideration predictability and stability in cross winds, something that has often lacked in highly aero wheels of the past. The result is that the wheels have less drag on the road (not just in the lab) and the bike still handles well in gusty and cross wind conditions.

Furthermore, their concept of approaching wheels as part of a system has led to their belief of selling wheels only as pairs. Because each wheel interacts differently with the air due to their position on and relation with the bike, they have slightly different characteristics. The front wheel is shallower and wider (26 mm), to improve stability and reduce drag in cross wind. The deeper and narrower (24 mm) rim of the rear wheel further reduces drag where stability is less affected. Although conceptually this makes a lot of sense, it takes away the ability of the consumer to purchase one wheel at a time or to combine an Enve front wheel with something like a rear disc from a different manufacturer  (without purchasing the corresponding rear Enve as well).

The wheel sets are named SES for Smart Enve Systems and are followed by a number, a dot and another number. These numbers refer to the rim depth. The 6.7 means that the front wheel is 60 mm deep while the rear one is 70 mm deep. A shallower set, like the 4.5, tend to be more popular for road since they are light and nimble while the deeper ones like the 6.7 and the 8.9 tend to be more popular to triathletes due to greater aerodynamics

Probably the most important attribute of the Enve Wheels is their incredible strength and durability. Manufacturing innovations, such as the molded-in spoke and valve stem holes, which displaces carbon fiber at the wheel rim instead of cutting it, results in greater rim strength. Also, molded in, conical, nipple seats on the inside of the rim allow the nipple to better align with the exit angle of the spokes (think ball and socket). This greatly reduces spoke fatigue (often common in carbon wheels) since they are not bound by the rim and allows for higher tension. And almost as important as the strength of the wheels, is the fact that this does not come at the expense of weight. It’s actually not hard to make a bomb proof wheel…you just add more material. The challenge is to make a bombproof wheel that weighs 1600g (for the set), such as the Enve 6.7 tubular set. It’s not surprising then that they have one of the highest strength to weight ratio in the industry.

Considering that most of Enve customers are looking for wheels that they can ride all the time, and not only on special occasions, having a wheel set that can withstand the rigors of  every day riding and at the same time be good as new when it’s time to perform is paramount. Enve is so confident of the strength of their wheels that they place no rider weight limit, unlike most of its competitors.  And in fact, Enve is so sure of their manufacturing process and quality control, that they offer a 5 year warranty on all of their wheels, also well beyond the industry average.

Enve’s attention to detail is further revealed in the rims’ textured braking surface.  Discriminating riders have often complained that all carbon wheels (with a carbon braking surface) do not brake as crisply or as consistently as those with aluminum braking surfaces, especially under wet conditions, even with the special carbon pads provided by rim manufacturers. By molding the braking surface into the rim, Enve can create a surface that allows for more positive brake engagement while still managing heat properly.

The wheels are available with 2 options of Chris King hubs and an additional 2 options of DT Swiss hubs. They are both very reputable hub manufacturers appreciated by mechanics and weight weenies alike. Nevertheless, 4 hub options are too many in my opinion. I guess they want to offer an option for everyone but a light and a lighter option from one company or an option from each company would be enough of a choice for me. The Powertap option though is important to note since it only adds approximately $400 to the price of the set (which is a fairly inexpensive way to get a power meter). Finally, our mechanic says these wheels come well built and are easy to true.

I test rode a pair of 6.7 carbon clincher wheels with a Chris King Hub with regular bearings. I have to say I liked the wheels from the start. The most noticeable feature was the lateral stiffness. The wheels accelerated quickly and had a solid feel to them, even out of the saddle, unlike other aero but mushy wheels.  They also behaved like shallow rim wheels out on the road, which means that they were as stable as they come. I normally choose deep wheels for their aerodynamic benefits, so I can handle a bike in cross winds. However, it doesn’t mean I like getting blown around and fighting the bike on a windy day. Plus, it only makes sense that if I’m leaning my body in different directions to compensate for the wind instead of focusing on staying aero, and if I’m weaving all over the road, I’m certainly not riding as fast as I could. These wheels also seemed to take several lbs off my bike. Ok, I’m exaggerating some but all these benefits, and the proven reduction in drag made the wheels feel super fast.

A couple of weeks after test riding the Enve wheels, I was heading out of town for race so I put on a pair of race wheels from another brand. I rode them Thursday and they felt unexplainably slow. I had our mechanic look at them to make sure nothing was loose or rubbing and he assured me that everything was fine. I rode them again on Friday morning and they again felt weird. In my mind they were flexing too much. When in doubt, go with your gut. I put the Enves back on the and bike headed out of town. Maybe it was all in my head but during the race I had that solid, fast feel that I had grown accustomed to. I had a great ride and a great race with a great set of wheels, and that is all I can say.

Time will tell whether Enve Wheels will become as popular and desirable as Zipp Wheels. Enve Composites is the first one to admit that the proof is in the pudding. They recommend (and so do I) that you test ride a pair and see for yourself. I think that you will find that they are some of the best wheel that money can buy.