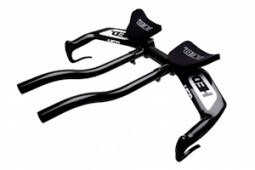 A common misconception about handlebar/aerobar combinations for TT and Triathlons is that integrated ones are always lighter. That is not the case. Most integrated systems on the market, including some popular and high priced ones, weigh about the same as the non-integrated ones. For example, the Zipp Vuka Aero system ($1200), which includes basebar, brake levers and aerobars, weighs 860 grams, and compare that to the VisionTech set up of the Alloy base bars, alloy TT clip-ons and aero brake levers (a popular combination among bike manufacturers and athletes) weighing 835 grams combined (at $340). Another misconception is that because a stem has the carbon weave look, it is automatically lighter. Some of the lightest aerobars, basebars and stems on the market are made of aluminum (by companies like Easton and Syntace among others). These parts when made out of only carbon often have to be reinforced in certain stress areas or in other instances are actually made out of aluminum with a cool looking carbon wrap. Still, integrated carbon handlebar systems are consistently the top choices among Tour de France teams and triathlon pros. Besides the obvious marketing advantage they have due to their space age look, most manufacturers claim significant aerodynamic gains as well as some stiffness benefits (those are the main selling points of Zipp’s Vuka Aerobars mentioned above). As a result, if you’re looking at taking this route and don’t mind spending some bucks, check out the HED Black Dog Aerobars, which at 630 grams and $900 is a remarkable handlebar system.

Integrated bars used to include mostly base bars, aerobars and stem. Most manufacturers have stopped including the stem and have added the brake lever. Not including the stem is a sensible thing, since that is so dependent on the fit and the rest of the bike. Besides the length issue there is the rise issue and to accommodate all the possible combinations in an integrated handlebar system was simply not feasible. Including brake levers can be beneficial, as long as these work properly. In the past, to go with integrated bars also meant sacrificing flexibility in the fit. Manufacturers have gotten the clue that most athletes need flexibility in the way their cockpits are set up.

The HED Black Dog Aerobars use the “no stem” with the brake levers included approach. The aerobar extensions are not permanently attached to the base bar using a bracket instead. The aerobar, however, is sold as a unit and when put together looks like it is all part of the same mold. HED offers the riders three options of extensions, which include the most common s-bend, the lazy s and the traditional one. The basebar resembles thin wings (from the frontal view) with an extensive trailing edge to reduce drag. These are available in the flat version (to facilitate climbing and popular with triathletes using the TT bike for various distances and terrains, and the drop version, more popular with cyclist using these for short and fast time trials. The ends of the basebars are beautifully shaped into (ergo) handles and then seamlessly molded into the brake levers. These in turn are easy to reach (even for riders with smaller hands) and come standard with a return spring for crisper breaking and internal brake routing for a cleaner set up. The arm pads offer several mounting positions and can be mounted on the regular and “wider” arm rests mounts.

Installing the HED Black Dog Aerobars was not a problem at all. Mechanics often cringe when they see a new piece of equipment full of thin lines, sharp angles and little bolts. These are usually synonymous with time-consuming and frustrating installations. Not in this case. Adjusting to my desired position was also not an issue. The adjustability allowed me to get the same position as my previous multi-piece set up. The bars come with the standard mounting bracket and I was surprised to find out that these were too narrow for me. I don’t think I have a very wide upper body or ride with my arms very far apart. The fact that the pads themselves angle upwards on the outside to prevent the rider’s arms from sliding out may have compounded my feeling of constraint. After installing the wider brackets (which gave me about two extra cms in each side), I found the position I wanted. The extensions had to be cut slightly but that is normal with most carbon extensions these days.

Out on the road, on the aero position the bars performed like a dream. They were comfortable, stiff, and most important (according to some), fast looking. I did have a little trouble getting used to the carbon molded ergo grips. I found them to be fine for most riding conditions, but a little small and a little slick for climbing steep hills or descending technical courses. Perhaps it was because I was used to the VisionTech base bar that uses a standard round tube gripping area with cork bar tape. Angling the HED base bar slightly and putting some bar tape on the grips improved its feel.

It is interesting to note that HED Black Dog Aerobars (along with others like the 3T Ventus) may not even comply with a UCI (Union Cycliste Internationale, governing body of international professional cycling) rule created in the late nineties, which says that bike equipment may not be more than 3 times deep than it is wide, normally known as the 3:1 rule…and the HED Black Dog basebar is certainly wider than 3 times its width. I suppose that this is to control how radical and aerodynamic cycling components may be. Regardless of whether the UCI ever decides to enforce this rule among the peloton, triathlons are not restricted by such rules. This means those with a little extra room in the budget can still show up at our local races and group rides with a very light and incredibly stylish set of integrated bars like the HED Black Dog Aerobars, which are “so aero” that could even be illegal in some professional cycling races. How cool is that?