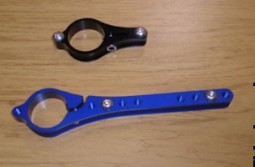 Fifteen years ago, long before aero water bottles and behind-the-saddle carbon cage mounts were prevalent; there were handlebar mounted water bottle cages. These were simple alloy supports that allowed us to place a conventional water bottle vertically in front of the drop bars (and then between the aerobars). That concept evolved into today’s aero shaped bottle fitted with straws and mesh, to allow the rider to simply suck the liquid and refill on the go (such as the Jetstream and the Profile Aero Drink system, still popular today). Now, the industry has practically done a 360. Several new mounts were recently introduced that once again allow the rider to place a conventional water bottle in front of the aerobars. The difference is that the new contraptions place the bottle, horizontally, in the same direction as the aerobar extensions, almost like a torpedo, thus reducing drag. They are also sturdier than the old ones that would eventually rattle from the weight of the bottle. One such mount is the Hed Lollipop, which gets its name from its simplistic design and shape.

How does it work?

The Lollipop mounts on the steerer tube of the fork with its circular bracket, above the stem, and extends forward. The holes on the elongated piece of the Lollipop are then used to attach a standard bottle cage. It is available in two models: the long (or adjustable), which has multiple holes for different cage positioning options, and the short (or non adjustable version), which allows for placing the cage in only one position.

Who is this for?

The Lollipop basically provides an additional option for carrying a standard, round water bottles so it is for those who (1) want to carry yet one more bottle and (2) want a more aerodynamic way to carry a standard water bottle than on the down or seat tube of the bike.

Remember that most time trial frames these days only have room for one water bottle mount on the frame. Consequently, most triathletes are limited to carrying three conventional water bottles, assuming that they are also using a double rear water bottle carrier. The Lollipop will offer these riders the ability to carry a fourth bottle. And for those who don’t need many bottles but are concerned about aerodynamics, this offers one of the best options, assuming that they are not looking at sucking the liquid from a straw.

The main advantage of the Lollipop is the aerodynamics  this set up provides while using a conventional bottle. I asked Hed for aerodynamic data and they said they are still working on it but it does seem to me that it reduces the drag from a frame mounted cage and a round bottle. Aerodynamic experts have for years complained about how bad round bottles on the frame can be in the wind tunnel. Now the bottle can be placed in an area which ,in theory, should cause little additional drag and could even reduce drag by filling up space and cleaning up the airflow. In addition, and in my view more importantly, it reduces the amount of movement required from the rider when drinking from a standard bottle in the aero-position.

A second advantage claimed by Hed is that it can offer a cooling effect in hot environments by placing a cold bottle in between the rider’s forearms, which is a highly vascular area. I have not actually experienced this phenomenon but Slowtwitchers seem to agree with Hed that it works, at least at some level.

The main disadvantage of the Lollipop is that it requires one centimeter of steerer tube column on top of the fork to mount properly. This means that all of those riders who have had their steerer tube columns cut exactly to their desired stem height will have to look for other creative solutions to mount the Lollipop. These can include a new fork, a different stem, or just getting used to riding with a lower front end.

Note: For those who are looking for this type of mount and do not have one centimeter of steerer tube above the stem, another option would be the XLab Torpedo, which mounts between the aerobars with Velcro straps.

The price of $60 for the long and the $45 for the short seem a bit steep when you look at the simplicity of the design. All my employees who’ve seen it immediately said that they could make one for much less. My experience however is that it would require at least a few hours and the final result would not be as clean and sturdy as the Hed one. For other creative designs using zip ties and scrap metal plates feel free to go to the Slowtwitch forum.

Yes, it does work quite well.  I always keep at least one centimeter of steerer tube extra just in case I change my cockpit set up so I did not have issues mounting it properly. I also like the sturdiness that mounting on the steer tube provides. The Lollipop was extremely easy to install and the end result was quite clean and simple. I also found it surprisingly easy to grab the bottle and drink from it without moving my upper body. It is important to note though that one should not use a cage that holds the bottle tight or that will cause jerking on the steering which could even result in crash. I also found that I liked using a shorter 20 oz bottle (as opposed to a longer 24 oz bottle) otherwise I would have to move my cyclometer too far forward on the aerobars.

I give Hed credit for the simplicity of the design and for offering yet another option to mount a water bottle cage. If you want the bottle close to your hands and don’t want to use a bottle with a straw, the Lollipop is a functional (although a little pricey) option.