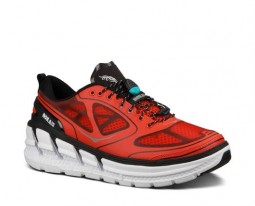 Hoka One One Conquest:

Those who have read my reviews in the past know that I’m a fan of Hoka running shoes. I like the out of the box concept introduced during a time when traditional companies were jumping on the minimalist bandwagon and I like the extreme cushioning that the shoes provide. However, like most other runners, I have not been crazy about their boxy appearance. Also, as a store owner, I was not always happy with their often sparse availability. About a year ago, Hoka was acquired by Deckers Outdoor Corporation, owners of such brands like Teva and UGG. With the new ownership, there was now a greater expectation of more appealing designs and better delivery.

The Conquest is one of several new shoes being introduced in 2014, and the first generation developed and produced under the Decker leadership. It should start appearing in your favorite running stores by middle of January. So far, although a couple of weeks later than initially announced, they are still on track to deliver them in January. I was fortunate enough to get a pair early in order to test it and review it.

I have so far logged about 150 miles on the Conquest and have mixed feelings about it. I have never started a review talking about the looks of the given product. I have always believed in function over fashion, but so much has been talked about Hokas “unique” and/or “unattractive” appearances that I thought in this case it would be appropriate. I give them a definite thumbs up and high marks for an improved look. That opinion comes not only from me but also from my wife and 16 year old daughter, who both know way more about what’s cool and acceptable than I do. The Conquest does not have that monstrous look which has become synonymous with Hokas. It is sleeker and quite a bit more stylish. The still substantial midsole complement the upper in a much more visually pleasing form. The swooping lines and strategically placed grooves in the midsole along with better color coordination all around now project speed and give the shoe a less bulky appearance. I received the “citrus black” version which is mostly a bright yellow shoe with black highlights, but the “fiery red black and silver” looks sharp as well (as do the two women’s color options). They do not look as “different” as other Hokas but they will certainly have a broader appeal.

So now to the important stuff: function. The midsole of the Conquest is made up of essentially two layers: The top layer, composed of Cmeva foam, is supposed to be super plush and in Hoka style, cradle the entire heel for increased stability. The lower layer, composed of an injection molded compound called Rmat®, which claims excellent weight-to-resilience ratio, is designed to provide outstanding energy return. In this lower Rmat® layer, 4 angled slots are included in each side, to further absorb shock through controlled flex.  As in other Hoka models, the Conquest utilizes the “Meta-Rocker” midsole geometry, as well as the low heel-to-toe differential of 4mm to encourage a more efficient foot gait cycle. New in this shoe is a water drainage system throughout the midsole, which I have yet to figure out if it makes a meaningful difference.

The challenge for companies like Hoka and Deckers is to improve on the structural and visual aspects of a product, without messing up the things that made  the product great in the first place: in their case the unmistakable super cushioned feel. In this area, the Conquest is not the same as my beloved Bondi. The Conquest feels heavier although it is really not. It’s claimed weight is 11.8 while the Bondi B’s had a claimed weight is 11 oz. However, the actual weight of a size 12 Conquest is 13.6 oz while the actual weight of a size 12.5 Bondi B is 14 oz so they essentially weight the same. It may feel heavier because it is definitely firmer. It is important to note that firmer does not mean less shock absorbent. My experience with the Conquest is that it provides at least as much shock absorption as the Bondis. I also have to admit that it has been a savior for me the last month. After two calf strains in November, my running was limited to 30 minutes twice a week. Since I started using the Hoka Conquests, I’ve been able to work my way up to 3-4 times per week, including a 3 hour run this past Sunday. Nevertheless, I still don’t like the feel as much as the Bondi Bs. It may be a personal preference thing. I like pillowy, marshmallow-soft shoes. The Conquest is not it. The Bondis are/were.

In terms of fit though, the slightly more curved last of the Conquest works better for me. I also like the super thin “no sew” upper, which gaps less and  is still quite breathable. The lightweight heel counter contributes to a snug and yet comfortable fit. The Hoka Race-Lace System is still a waste of resources (see below) in my opinion *. I find it hard to believe I’m the only one who does not like it, but oh well. I can continue to remove them and use the standard laces which are thankfully still included. The Conquest seems to have overall a narrower footprint than other Hokas. Either this or the additional firmness made it feel less stable on single track trails for me. Hoka clearly markets the Conquest as a road shoe but the same was the case with the Bondi Bs, which like monster trucks, could “roll over” most obstacle without “tipping over”. Nevertheless, the outer sole of the Conquest, with what Hoka calls “Fluid Ground Contact Design Strategic Hi-Abrasion Lightweight Rubber Traction Zones” does offer slightly more traction and durability than the Bondi B’s lightweight, soft and flimsy outer soles.

The Conquest is a welcome and much anticipated addition to the Hoka family. For those looking for the Hoka experience, but who just couldn’t bring themselves to getting past the looks, this should be the ticket. But more importantly, the Conquest offers customers a slight twist on a successful concept, and new technology from a notable brand. It comes as a natural expansion of its line. Although I am still eagerly waiting for the Bondi B 3s (or Bondi Evos) to come out, until then I will continue to log  the bulk of my miles in the Hoka Conquest.

*I did not like the Bondi S’ quick lacing system at all (also used in the Conquest). The quick laces are much thinner than regular laces, which I guess were made to slide easier through the eyelids. However, they are so thin that they hurt my fingers as I pull them. Furthermore, the locking mechanism comes lose during my long runs, causing me to stop and adjust periodically. Hoka is not the first running shoe company to incorporate speed lacing systems into their shoes, and they are certainly not the first ones to fail at providing a better lacing system than conventional shoe laces. I wished that they had partnered with Yanks or Xtenex to provide quicker lacing systems that are proven to work properly. Or better yet, I wish they had not provided speed laces at all. Leave that choice to customers and specialty stores. (Hoka One One Bondi S Review by Cid Cardoso Jr, June 2013)