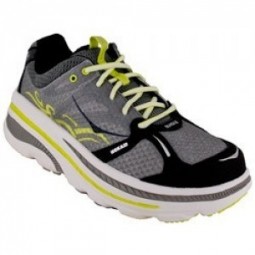 Hoka One One Bondi B Running Shoe

In a time when running shoe midsoles seem to be getting thinner and thinner (following the trend set by the Vibram Fivefinger shoes), along comes a brand that takes running shoe design in another direction. The Hoka One Ones (pronounced oh-nay oh-nay) use such an over-sized midsole that they have attracted nicknames such as Moon Shoes, Platforms and even Spice Girl Shoes. They have definitely turned their back on the “minimalist” movement and stuck to the concept that when it comes to running more (cushioning) is better.

I was first introduced to the Hoka One Ones in early spring, by Dan Empfield, founder of Slowtwitch.com, former owner of Quintana Roo Bikes and Wetsuits and product consultant for several endurance oriented companies. Dan has years of experience in product design and in all aspects of running, biking and swimming and has been inducted into the Triathlete Magazine Hall of Fame for his contributions to the sport. More importantly, he’s one of us when it comes to training and racing. He doesn’t just sit in front of his computer writing theoretical stuff. He rides his bike and runs the trails in the high desert of Southern California because he just loves the sports, and to get his fifty something year old body faster still. So I respect the guy. But even I had to crack a couple of jokes when I first saw the Hoka One Ones.  Nevertheless, I’m as open-minded as he is and I’ve been around long enough to know that the proof is in the pudding, so I was glad to try them (It is important to note that Dan was not paid or contacted by Hoka One One to market their shoes…he simply came across them and thought the design was  unique and promising and worthy of testing).

For Spring Break, I went to visit my brother in Boca Raton. This meant very little swimming and biking, limiting my workouts to pretty much just running. Don’t get me wrong, I love running. But let’s face it, at 42 I have over 25 years of hard racing in my legs and after 4 days of running on pavement, my legs were trashed. I then remembered that I had packed my new Hoka One One (brand) Bondi Bs (model). So the next day I ran out wearing them, still a little self conscious about their look. The fresh feeling though was immediate and unmistakable. The legs felt springy and lively, and I felt like I could run forever. The next morning I couldn’t wait to go out again, and the awesome feeling was the same yet again.

I was surprised about how easily I adapted to them. Despite feeling a little higher off the ground and having a thicker pad to land on, my stride felt pretty much the same. My leg turnover remained constant and I continued to land in the mid-foot, despite what looks like a massive heel (see picture). It is important to note that although the Bondi Bs have a substantial midsole, the heel to forefoot differential is only 4 mm…which is essentially the same as my Newtons and not much different than other shoes that promote “natural running”.  Although they may not fall in the minimalist category, I found them to work fine for those who have an adopted a more “natural running” form which avoids heavy heel striking and over-striding (even though the softness of the midsole is designed to accommodate and assist heel strikers as well).

The Hoka One One shoes use an EVA for their midsole that is 30% softer and they make that midsole 2.5 times as thick as that of a conventional running shoe, offering more cushioning than other shoes in the market. The 40 mm high midsole allows for a staggering 13 mm rocker (curved sole) profile which promotes a more fluid and natural stride and increases efficiency. The wide, semi straight midsole wraps around the upper thus recessing the foot. This increases stability and overall surface area of the outer sole improving traction as well. And the impressive thing about this shoe is that as bulky as it looks, it only weighs close to 11 oz, which is as light as most light training shoes.

I continued to use the Bondi Bs after my first few runs in Florida and continued to experience that same feeling of “fresh legs” with every run. The wide stable last accepted my orthotics well and the light weight made them seem nimble, despite the bulky mid sole. In addition, the little aches and pains that followed long runs were suddenly gone. In a year where I had to deal with several nagging injuries, I no longer dreaded the last half of a long run or the hard run after the bike, since my legs seemed to be taken care of. I was worried about potential loss of energy during the stride as some hinted in different forums but my timed and tempo runs showed no difference at all. In the track, they did feel a little weird. The softness of the rubber track on top of  the extra cushioning of the Bondi Bs made me feel a little like I was running on a children’s inflatable moonwalk. On trails they offered adequate traction and felt surprisingly stable. However, the biggest benefits are still felt on the hard pavement and on long runs, where the legs take a beating. I wore them at The Ford Ironman® Louisville in August and had one of my fastest “Ironman® marathons”. It is not surprising then that they are being spotted in Ultra Runs all around the country. In training, I still alternate between them and my trusty Newtons. I found the diversity helps to work slightly different muscles and aspects of my run. The wear patterns at the bottom of both shoes though are remarkably similar.

I admire the fact that the makers of the Hoka One One had the courage and confidence to come up with such a unique shoe at a time when other manufactures are jumping on the no mid-sole bandwagon. The price tag is on the upper end of most running shoes, but not much different than alternatives from other niche companies. Yes, my teenage daughter still calls them the “Geeky Shoes”, but she rolls her eyes too when I wear compression socks and tri shorts and they both also make my experiences in ultras quite a bit better. If you’re worried about 8th grade fashion, the Hoka One Ones are not for you. However, if you’ve ever experienced tired legs during a run, you should try on a pair of Hoka One Ones. You will most likely be pleasantly surprised by the unparalleled cushioning. Perhaps sometimes more is in fact better.

Note: The Hoka One One Bondi B shoes tend to run a little on the short and narrow side. I wear a size 12 in most running shoes and went to a size 12.5 in the Bondi Bs.