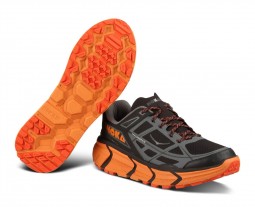 Hoka One One Challenger ATR

After the introduction of the Clifton running shoe, Hoka One One lovers like me were eagerly anticipating it’s off road version, the Challenger ATR.  With a more aggressive outsole and a slightly more supportive upper, Hoka said to have created a super light weight, smooth riding shoe for the all terrain runner. I could not wait to get my hands on a pair (or my feet in them); but when I did, I did not have the life changing experience that I was hoping for.

The Hoka Clifton’s super plush and yet springy feel at a sub 8 oz weigh was an immediate hit among runners like me, who still wanted to pick up the pace once in a while but needed more cushioning than your everyday racing flat or other minimalist shoes out in the market. I can honestly say that the Hoka Clifton became one of my top 3 favorite shoes of all times; this is coming from someone who has been running for over 30 years and who has run in a LOT of great shoes. Nevertheless, like many runners these days, I spend as much time training off road for the impact reduction on my legs and for the nicer scenery, as I do on the pavement. I also do some trail races, especially during the winter and early spring so having a shoe that I can take off road is important. In the technical trails (full of rocks and roots and made up of uneven terrain), the Clifton’s extreme softness in the midsole became a little bit of a problem.  When landing unevenly (as happens often on trails), the super soft EVA midsole of the Clifton could not slow down the sideways momentum of the foot enough. When that momentum reached past the point of no return, then the ankle was allowed to “turn” into a painful overstretch of ligaments and muscles. In other Hoka road shoes like the Bondi, the midsoles were soft but perhaps a bit more robust than this and consequently seemed to handle the trails a little better. Additionally, a wider base and straighter last (again like the Bondi) provided a more stable ride overall on the single track situations.  The Cliftons were fine for me on the bridle trails (gravel roads) but as I entered the technical trails and stretched my stride, I experienced several close call ankle rolls.

So the Challenger ATR seemed like the perfect off road option for me on paper. As soon as I tried it on, however, I started having doubts. First of all, for some reason that I cannot understand, the sizing was off in relation to the Cliftons. I can understand shoes from different manufacturers following slightly different sizing patters, but two shoes that are so closely related that theoretically follow the same mold, should definitely fit similarly. I wear a size 12 in the Cliftons but the size 12 of the Challenger ATR was noticeably bigger. It was roomier in the toe box (which I could live with and some will probably like) but it was also half a thumbs width longer.  Since I like shoes to fit a little on the big side, the size 12 Cliftons were already roomy so the Challenger ATRs were now way too roomy, almost to the point of being sloppy. I then tried the 11.5 but these were just a tad too small. When in doubt, my experience is to go up so I went with the 12s. After playing a little with the laces and picking thicker socks, I got the shoes to fit reasonably well. The feel was not the same as the Cliftons. There were elements that reminded me of my beloved Clifton, but the overall feel was firmer and the shoe felt significantly stiffer.

The Challenger ATR has the same Early-Stage Mata Rocker but the full EVA midsole is supposed to be slightly firmer then the HIP CMEVA used in the Clifton (see my previous review for description). That is understandable as it is designed to “correct” or offset the “rolling problem” described above. In addition, to enhance the stability even further on uneven terrain and to provide better traction, the Challenger ATR’s outsole was outfitted with independent rubber pods and more aggressive 4 mm lugs.

The result for me was that unfortunately the Challenger ATR became too stiff, especially in the forefoot. Not only was the shoe not as fun to run in as the Cliftons, but I actually experienced hotspots on my forefoot (on the balls of the foot and close to the toes) as I ran on single track trails. Yes, the Challenger ATR was definitely more stable and I did not have the near ankle roll experiences as I had in the Cliftons. However, it seemed like there was a stiffer plate in the midsole as the forefoot did not conform to slight variations in terrain. For my feet and running style that was a problem.  I felt less springy and after 40 minutes or so experienced some degree of discomfort. I ran several more times with different sock/insole combinations and in different types of terrain but the issues persisted. On the bridle trails, the discomfort was less but for those surfaces I could just use the Clifton. On single tracks, the increased stability came with a price for me: less efficiency and the occasional hot spot.

I kept wanting to like the Challenger ATR but at the end of the day it did not prove to be the shoe that I was looking for. That is not to say that it is not a good shoe and the right shoe for other runners. Perhaps I had unrealistic expectations, considering that I liked the Cliftons so much and I like running on trails with light weight shoes. Perhaps I’m also looking for something that is somewhat of a contradiction, or at least difficult to tune: a shoe that is stable enough to run hard core technical trails but also plush enough to provide ample cushioning on long runs, provides springy feel and possesses a soft forefoot. Maybe I just prefer road shoes even for running off road. At 8.6 oz the Challenger ATR is still an amazingly light trail shoe. In addition, the enhanced upper, firmer midsole and more aggressive wear resistant outsoles should also provide a longer life than the Clifton. If you’re looking for these characteristics in a (trail) shoe, the Challenger ATR is probably the shoe for you. Unfortunately, it was not the shoe for this tester.  As Hoka continues to innovate and expand their product offerings, I look forward to testing newer versions of the Challenger ATR as well as other ATR (all terrain) and road models.