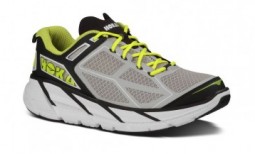 Hoka One One Clifton Running Shoe: $130

The Clifton was recently introduced by Hoka One One with a lot of fanfare around the country. Specialty running stores threw pizza parties and held Clifton nights with demo shoes and giveaways. Loyal Hoka customers rushed to buy new pairs, especially once it became clear that the demand was going to be significantly higher than the initial supply. This type of frenzy is rarely seen with running shoes, as it is usually associated with cell phone or tablet introductions. So does the Clifton really live up to the hype? For the most part I would say yes.

The Clifton promised to be the best that Hoka could offer; a less bulky, super cushy shoe at an impressive sub 8 ounce weight, which is normally associated with minimalistic racing flats. As a Hoka fan who uses the Bondi consistently for most long distance training, I was obviously excited about the prospect of a Hoka shoe that could be used for racing the shorter stuff and for doing tempo work outs.

At first glance, the Clifton resembles the Conquest (which I reviewed a few months back) with the tighter weave material in the upper than previous Hoka models, and the angled slots in the midsole. However, once on, it is immediately apparent that they are completely different shoes. The Conquest feels quite firm while the Clifton is extremely plush. For someone like me, who always liked the softness of the Bondi (and associated that feel to the Hoka experience), this was a welcome confirmation.

The snugger fit of the Clifton upper provides a better fit for most individuals. As expected, the Clifton fits more like the Conquest, which proved to be a more popular fit for me as well.The Bondi 3 in particular, fit so wide that many runners had to deal with a sloppy fit, or required thicker socks and after market insoles. The toe box of the Clifton is still roomy but the snugger upper just tapers better through the mid-foot and into a narrower heel. This not only prevents excessive foot sliding inside the shoe, but also eliminates some wrinkling of extra material in the upper. The midsole also remind us of the Conquest, with the 4 angled slots designed to absorb shock thought controlled flex. However, for the Clifton, Hoka also introduces a softer and supposedly more responsive version of its EVA midsole, called HIP (High Impact Performance) CMEVA. Its plush and springy nature results in ample shock absorption and excellent energy return and yet  no added weight. With the Clifton, Hoka eliminates the Rmat layer of the midsole. This resilient material provides and additional layer of shock absorption but perhaps more important, some additional structural integrity to a running shoe. Consequently, its absence reduces the amount of weight, but also the overall stiffness of the midsole and the stability offered. The Clifton, like the Conquest and the Bondi still uses the Early Stage Meta-Rocker shape, which places the transition zone behind the metatarsal heads to provide a faster transition to the forefoot and thus a smoother ride. Finally, Hoka further reduced the weight of the Clifton by utilizing “strategic Hi-Abrasion Rubber Zones” in the outer sole, which means that they ONLY placed the more wear resistant material in the areas of higher impact, such as heel and forefoot. And note that these Hi-Abrasion plugs are actually supposed to make the outer sole of the Clifton more wear resistant than previous versions of the Bondi.

When I put the Clifton on, I liked it immediately. It had the improved fit and look of the Conquest with the softness of the Bondi. And it felt incredibly light. It was kind of an odd feeling to have a shoe as light as a racing flat and yet more cushy than most training shoes. When I ran with the Clifton, I liked the shoe even more. I expected the shoe to feel a little on the mushy side but it was actually more responsive than I expected. It was time to fly as Hoka advertised. The shoe was screaming to go faster as I ran the first few miles. It was an oddly liberating feeling to be able to pick up the pace with no additional impact felt on my feet. I had that fresh legs feeling that don’t come very often at 45. I purposely pushed harder for a few miles and landed heavy on my feet. The shock absorption was still incredible for a shoe that light. Eventually, I settled into a fast efficient pace and felt like I was simply gliding. I like the fact that Hoka kept the heel to toe drop to 5 mm, which works well for fore-foot strikers like me. I also think that the 5 mm drop, along with the substantial midsole, should not hurt those used to a more conventional higher heel to toe drop. It was easy for me to see why this shoe has been so popular in such a short time.

So why should one not buy this shoe? The first reason would be its durability, or lack of durability should I say. It is normally the case that when a manufacturer reduces the weight of a shoe drastically, it does so by using less amounts of material and/or less dense materials. And the result is often a shorter life-span. This seems to be the case with the Clifton. I do not anticipate its durability to be anywhere near that of the Bondi or Conquest. In fact, one of our testers here at Inside-Out Sports (a male runner weighing 170 lbs) got about 200 miles from his first pair before he had to retire them (see picture attached and note the collapsed midsole).  Although this mileage is not bad for a racing flat, it is certainly not in the same category as other Hoka shoes where testers got 600 -1000 miles. It is important to remember that with lack of weight comes a price. Sometimes it is lack of shock absorption but in the case of the Clifton it is durability. But that’s just the way it is. Runners love the Saucony Kinvara but that is also a 200 mile shoe for someone like me. Some of my favorite shoes throughout the years were the same way, like the Adidas Rotterdam…soft and light…great for tempo training and racing but only good for a couple hundred miles.

The other reason someone may skip the Clifton craze is if over pronation is an issue. Unlike the Bondi, the Clifton’s midsole does not wrap substantially around the heel cup. In addition, its last is not as straight through the arch. Finally, unlike the Conquest, the midsole is not as structurally reinforced. The result is simply less support. Hoka still kept the last (shape) to what I would call semi-straight, resisting the old trend to use a significant arch cutaway in light weight shoes. This allows for a shape and fit that accommodates orthotics and after market insoles well and still offer a little stability for those mild pronators wanting a lightweight and cushy shoe.

The Clifton is yet another example of how Hoka’s unconventional approach to running shoes is changing the nature of such products. No longer does one have to sacrifice shock absorption for weight. Although I will likely continue to use a pair of Bondis for my heavy duty training, my next 40 mile race and my next Ironman will definitely be run with the Cliftons. In fact, for most people this could even become their all around racing shoe. If you have not put one on, I would suggest that you at least try one next time you’re trying on running shoes. I can guarantee that the weight and cushioning will blow your mind. If you’re not an extreme pronator and if you’re willing to spend $130 for a super pair of shoes that you may have to replace somewhat often, these are the shoes for you.