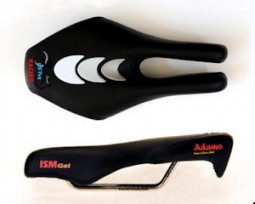 If you ask cyclists or triathletes what they dislike the most about long rides, they will tell you that it is saddle related discomfort. As a result, bike saddle manufacturers continue to dream up new ways to improve comfort, so there are now probably more models of saddles in the market than any other component category.  Most designs continue to adopt the same basic triangular shape while employing new and different materials to make them softer or more flexible in certain areas. Others focus on the now popular cut outs and holes to reduce pressure on the perineal nerve. Lately, a different looking saddle has been showing up at triathlons around the country. Our mechanic calls it “the lobster claw saddle”, due to its uncanny resemblance. The manufacturer, ISM, calls it the “Adamo” Racing Saddle, which means “pleasure” in Latin.

ISM, or Ideal Saddle Modification was founded by Steve Toll, an independent thinker and cyclist. This new saddle concept was then refined by the legendary John Cobb, relying on some of his previous experiences with seat design and manufacturing. The end result was a shorter, stubbier saddle, different from anything else in the market. The saddle is slightly narrower than most in the back and a little wider than most in the front, and looks like it’s missing about an inch and a half from the front tip. Halfway from the back it actually splits into two sections that run perpendicular to the top tube, never joining in the front area.  The Adamo Racing Saddle is 240 mm in length (in comparison to 300 mm the popular Fizik Arione) and only 130 mm wide (while the Fizik Arione measures 140 mm), in its widest area. It weighs 280 grams, which is middle of the road as far as saddle weight goes (assuming they have stainless steel rails), and it comes in 6 different color options (Black, Gray, White, Red, Blue, Yellow, Pink). The rails are long, 100 mm, allowing for plenty of adjustments and each saddle has a tri hook imbedded in the under rear section, to allow for quick bike racking for those who do not use a behind the saddle water bottle holder.

The word on the street about the Adamo Racing Saddle is that you either love it or you hate it and that you will know right away. I was further told that if you come from a cycling background like I do, I would not like it, inferring that those of us who have put countless miles on thin leather saddles have come to either not feel any pain on the crotch or have become adept at ignoring it (which in my case is certainly not true). Oddly enough, my first reaction upon using the saddle was that I neither loved it nor hated it. I found it interesting and welcomed the new feeling, but I did not have one of those “oh wow” moments. The pressure shifted from the center of the crotch area a little further back and to the sides, but there was still pressure.

I found the more I rode it, the more I liked it. I began to appreciate the fact that my weight (and therefore most of the pressure) was no longer at the perineal nerve but more on the pelvic cavity of the hip bone. The base of the scrotal sac was positioned in the air, between the two separate parts of the saddle while the sac itself rested freely off the front of the saddle. Other so called “tri”saddles, address comfort in that area by padding the nose, often making it bulky and therefore less comfortable in the long run. By essentially removing the nose, and resting the rider’s weight equally on each side of a bone structure, this saddle became more comfortable with time. Also, according to ISM, this prevents the blocking of blood flow common with other saddles that often causes numbness and additional discomfort. I was obviously reviewing this as a male cyclist but it is important to note that ISM markets this as a unisex saddle and the Adamo Racing Saddle is used by as many pro women cyclists and triathletes as men.

Positioning the Adamo Racing Saddle properly took a little time but it was easy enough to do. Once you understand how you are supposed to sit on this saddle, it’s relatively easy to position it in relation to the previous. Their website, http://www.ismseat.com has a good explanation and some pictures explaining where the rider should sit and how the saddle should be positioned but any experienced shop or fitter should be able to properly install and position the seat. After that, it may still take a few rides to fine tune the position but that is standard for such new equipment. I had a set of Allen wrenches with me for the first few rides and probably made two or three further adjustments after the initial set up. The Adamo Racing Saddle seems to allow for less rider movement, since the saddle actually has less room from front to back. The limited movement felt a little weird since I’ve been riding a long saddle and therefore have grown accustomed to sliding up and down the saddle quite often. However, I did find that I was able to ride in the aero position  for a longer period of time, which shows a greater aerodynamic gain than just about any other improvement  you can do to your riding equipment.

At first glance, the wider than normal front area of the saddle can seem to be an area of concern. Some have even hinted that closing the gap between the two front parts, and thus making the front saddle “narrower” can make it more comfortable. I thought about that and after riding it as is, I felt it was unnecessary. I honestly had no complaints with the width of the saddle. Like most old time racers, I used to believe that for the most part, narrow saddles in the front were better. This does not seem to be the case with the Adamo Racing Saddle.

I did have a hard time riding the Adamo Racing Saddle in the non-aero position ,  at least initially. I’m not sure if this is good or bad. I see it mostly as good since it made me want to get in the aero position (see above). Nevertheless, even in races there are plenty of times when riding in the non-aero position is advisable or even necessary. Again, the more I rode, the more used to it I got. I also noticed that sliding back a little (away from the split part) made riding in the non aero position more natural. ISM does not market the Adamo Racing Saddle as a tri or time trial saddle only but I found in the aero position was where I liked it best. ISM does offer other models such as the Road, the Peloton and the Touring that I suspect would be more geared toward standard road riding.

Dan Empfield once said, riding in the aero position requires some tolerance for crotch discomfort, but we can still look for ways to minimize it. The Adamo Racing Saddle is a definite departure from conventional saddle designs and this approach may work for those who are not 100% happy with their current saddle (which is probably the case with most triathletes). Don’t judge the Adamo Racing Saddle by the way it looks…try it yourself and you may be pleasantly surprised.