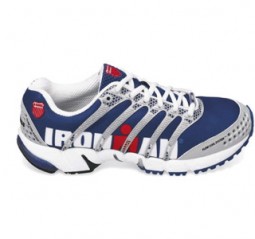 If you were in Kona last year, it was impossible to miss the presence of K-Swiss around the Ironman village and around town. They sponsored the run course, post race parties, a coffee shop, and several top pro athletes (including Chris Lieto) and introduced the commemorative K-Ona Running Shoes. In 2009, it looks like their presence will be further expanded as they are  in negotiations to be a licensee of the Ironman® brand and a main sponsor of several Ironman events, including the two World Championships. So what makes these running shoes different and better than the rest? Are they in the triathlon market to stay? Should triathletes rush to purchase shoes from this latest player into this crowded market?

K-Swiss started making shoes over 40 years ago focused on the sport of tennis. Since then, they’ve gained market share in the lifestyle category and were pretty successful in offering customized versions of classic models online. Now, they’re targeting the running shoe market, apparently using triathlons as the platform. The K-Ona is a lightweight stability shoe weighing at an impressive 9 oz. Its mid sole is flexible due to several flex groves in the forefoot and yet fairly supportive due to the polyurethane plug in the medial side and rigid TPU shank in the mid foot. The shock absorption system is something called SUPERFOAM™ technology together with a k-EVA midsole. Its upper is light and flexible, utilizing the 5 branding stripes on each side of the foot for additional support. Little holes in the front, called the FLOW COOL SYSTEM ™ help provide additional breathability. The outer sole is reinforced by a more durable material called Aosta ® II Rubber. The distinguishing features that make this a triathlon shoe (other than the fact that triathletes seem to like light trainers with a little stability) are the water drainage holes in the mid and outer sole and the 3 unique designs of the upper (of the commemorative editions): US Flag, Australia Flag and Ironman® trademark.

I had mixed feelings about this shoe. I liked it because it was light, yet responsive… supportive, yet comfortable. It is the type of shoe that I normally like. However, it didn’t set my world on fire. It had a firm feel at first, but it seemed to “soften” as I ran more (which I preferred). The upper was flexible to the point of being slightly loose. For those with narrow feet this may be a problem. From a performance point of view, the most noticeable characteristic of the K-Ona shoe was how light it felt. I think that it may be a good shoe for a 150 lbs triathlete to wear on the Queen K (or any other Iron-distance race) but, for those over 180 lbs, it may be more of an Olympic-distance type of shoe. I, also, actually like the fact that unlike other competitors, this shoe did not come with elastic laces nor was marketed to be used always without socks. My experience is that not everyone likes elastic laces and that not everyone will benefit from eliminating socks, even during racing. This latter requires not only a seamless upper but practice, proper lubing and to a certain extend the ability to tolerate friction on the part of the triathlete.

Other than the unique design of the upper, there really seemed to be no breakthrough technology on these shoes. To their credit, K-Swiss didn’t pepper this shoe with useless gimmicks sticking to features that work, like flex grooves, dual density mid soles, selective durable outsoles and a fairly responsive mid sole. Nevertheless, sometimes without risk there is no great reward. The result is a fine but not necessarily super-remarkable shoe. Again, other than the upper design…these are readily recognizable. In my reviews I try to stay away from commenting on fashion as my expertise is more on the function of a particular product Yet, if I wear my K-Ona Ironman® Shoe to the gym I will undoubtedly get comments and requests. I suspect that if I had the US flag one that would be even more so.

Make no mistake; K-Swiss is not a small triathlon company. Sales in 2007 exceeded $400 million. Their involvement in triathlon can be good in a time when most companies are shrinking their sponsorship. The K-Swiss K-Ona is a functional shoe aimed at a niche market for now. Even though the commemorative Ironman® trademark ones sold for $120 and the “flag” ones sold for $110, the regular K-Ona will sell for $90, which seems to be in line with most quality shoes in the market. If you’re looking for a very light stability shoe this is another choice. Plus, nothing identifies one more as a triathlete than wearing a pair of Zoot, Newtons and now, K-Swiss K-Ona Running shoes