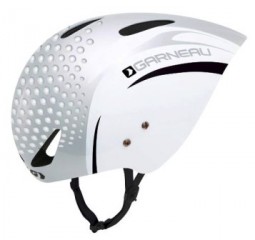 Aero helmets have become almost as essential as tri shorts these days. For the year’s A race, or to achieve that coveted PR, an aero helmet is a must. During the old days of triathlons, triathletes could only dream of aero helmets. None conformed to the US’s safety standards and most were obscenely expensive and only available in Europe. However, the UCI finally decided that bike helmets should do more than simply provide an aerodynamic shell. They should indeed live up to its “helmet” part and actually protect the rider’s head in case of a crash. With that, prices came down and became more available, as manufacturers could now mass produce them for the every-cyclist and triathlete. We could now shave seconds on the local time trial circuit or triathlon and could look like Fabian Cancellara on Tour de France’s prologue.

Aero helmets do provide an aerodynamic advantage. All things being equal, less drag means more speed at the same effort. As stated on a previous review, most of the data I’ve seen suggests that an aero helmet can save a professional athlete around 2 minutes over a 112 mile course. Contrary to what some think, for slower riders the savings will likely be greater, as slower riders are out on the course longer. Anyone who has spend any time in the wind tunnel will tell that aerodynamics do matter…even for slower riders. Two minutes may not sound like much but it can be the difference between a PR and just another race result or lead to a ticket to a World Championship.

Still, when choosing any equipment it is important to look at not only the advantages gained but also at any possible disadvantages that come with them. With aero helmets the most obvious one is the greater risk of overheating l. The overheating conditions will certainly vary according to individuals but generally the potential to overheat will occur at any race where the rider will spend more than two hours on the bike in temperatures above 85 degree. And as any coach will tell you (or anyone who has experienced overheating), overheating will undoubtedly cost the athlete more time than the aero helmet will save. Chrissie Wellington has won the Hawaii Ironman 3 times wearing a conventional helmet. Craig Alexander won that same race twice also wearing a conventional helmet, while the majority of the competition went with an aero helmet. However, after losing over 10 minutes on the bike and finishing 3rd in 2010, he came back with an aero helmet in 2011 to finish once again in the top spot. So what is the right choice? As with most things, it depends. It depends on the person, the conditions and on the helmet itself. Not all aero helmets are created equal. Remember that manufacturers are now making aero helmets for Tour de France cyclists, whose longest time trial is 40 miles and who don’t have to run afterwards, and for Ironman athletes who ride 112 miles and then have to run a marathon. In the first scenario, it’s definitely okay to sacrifice ventilation for the least amount of air drag. The helmet will have fewer vents, a tighter fit around the ears and often a face shield. Seconds saved on the bike can lead to the yellow jersey. With the latter scenario, the opposite is the case. Helmets have more vents and channels designed to move wind throughout the scalp and around the ears. Seconds shaved have to be balanced against the potential threat of overheating. Yet, most manufacturers attempt to make a helmet that is marketed for both scenarios, in order to cater to both segments with one product.

One of the best kept secrets in the aero helmet category is the Louis Garneau Chrono Leggera. The Chrono has actually been around for quite some time and it was updated a couple of years ago with the same dimples and bigger vents of Superleggera Aero Helmet. The Chrono Leggera is basically an aero helmet with a really short tail and no coverage of the ears. It still has the dimples, which I find hard to believe really increases aerodynamics in a meaningful way but the vents are still big for aero helmet standards. This has become my favorite aero helmet, as I seem to favor longer races in hot and humid weather. The big vents and exposure of the ears make it the coolest (in terms of temperature) aero helmet I’ve ever tried. But perhaps just as important, it behaves like a normal helmet. Maybe I’m getting old, but, I don’t really find aero helmets that much fun to wear. Yeah…it was kind of cool (as in exciting) at first and I did feel like a fast bad a## when it put it on, however, eventually, I figured out that I just did not like wearing them for 5 hours straight. The road sounds got muffled by the fairings over the ears and these seemed to create more and more pressure on my ears. Finally, in windy conditions I found that I sometimes had to strain my neck to look at different directions. When I rode 5 hours with my Chrono Legerra, none of these issues surfaced. In fact, I even forgot that I was wearing an aero helmet. It felt like I was wearing my conventional non aero helmet, comfortable and full of vents.

So then the question is how aero is the Chrono Leggera? Should I even call it an aero helmet? This question was answered when I went to the A2 Wind Tunnel, outside Charlotte. Besides testing my position, I tested the Chrono Leggera against my other aero helmet, the Louis Garneau Rocket Air. The results were virtually the same. I must disclose that I did not spend too much time testing helmets as at time in the tunnel is expensive and with several other things to test, I could only spend so much time on this. I only tested these two helmets, so there could be other aero helmets that could work better than both. It is important to understand though, that from an aerodynamics point of view, a helmet that may be ideal for me may not be ideal for someone else. Position on the bike, particularly head and neck position and how it relates to the rider’s back will make one helmet work “better” than another. Also, when measuring air drag, moving the head around too much is really bad for aerodynamics. So aero helmets work particularly well when the rider can keep the head still in a position where the air flow is smoothed out evenly and thus turbulence is diminished. Furthermore, looking down while riding with an aero helmet will result in a long tail sticking up in the air…not necessarily great for aerodynamics. In this situation, a helmet with a short tail can actually create less air drag. There are various new helmet designs showing up in the pro ranks currently and several now include a shorter tail.

Without greatly sacrificing aerodynamics, virtually eliminating the threat of overheating, and largely increasing comfort by leaving the ears uncovered, the Chrono Leggera is a logical choice for triathletes racing half ironman and ironman races in hot weather. Mirinda Carfrae wore the LG Chrono when she won the Hawaii Ironman in 2010, as other contestants melted on the lava fields later during the run. It is not flashy and it doesn’t make us look like our Tour de France heroes, but it certainly is functional. At $129.99 is it also one of the least expensive “aero” helmets in the market. I’m surprised more manufacturers have not come up with updated versions of it. Helmets that work for cyclists are not always the same as the ones that work for triathletes.