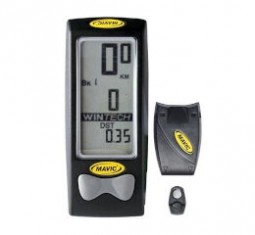 As a shop owner and avid cyclist, I’ve been waiting for this product for quite some time now. A wireless cyclo-computer that offers the basic speed and distance functions and that allows the user to add wireless cadence (or pedal revolutions per minute), all for under $100. And that is reliable. The reason I add this last comment is that there have been other such devices in the market in the past, such as the Cat Eye Double wireless and the Polar Cadence Unit (designed to work with some Polar Heart Rate Monitors). Both were more expensive (with all the required parts), more complex to use, and most frustratingly, worked only sporadically. With the Wintech FS Cyclo-Computer and the Wintech Digital Cadence unit that just became available this year, Mavic has hit a homerun, offering all the basic useful cycling functions in a reliable wireless digital format.

Mavic, the French manufacturer of bike parts is better known for its high quality wheels. However, they are not strangers to electronics being that they were the first to introduce electronic gear shifting with its Mektronic group in the late nineties.  They were also the first to incorporate cyclo-computer sensor units into the front wheel quick release skewers. With the Wintech FS Computer and Cadence unit, Mavic went back to basics, using new digital technology and design to address old issues.

The first thing I like about the Wintech line is its modular approach, which allows the customer to purchase a basic model and add components according to his or her needs and budget. In other words, if a customer does not want the cadence function, he/she can purchase the FS unit alone, for only $49.99 (which is standard for a good wireless cyclo-computer). However, if at a later date he/she decides that the cadence will be a useful function to have, he/she can purchase it separately for $39.99. This will then work with his/her existing FS unit. Finally, if the customer then decides they want the distance and speed functions while riding a trainer, he/she can purchase the home trainer kit for $39.99. This trainer kit is essentially a stronger transmitter that attaches to the chain stay and the rear wheel. It seems to me that perhaps Mavic could simply ship the FS computer with a rear mounted sensor unit but I suspect that most people mount the speed and distance sensor on the front wheel so this is offered as yet another option (compatible with all current Wintech computers). Either way, I do give them credit for at least coming up with an alternative instead of just ignoring the problem.

Both the Wintech FS Computer and Cadence unitsare moderately easy to install. They use zip ties for attaching the sensors, which normally work well for such installation. However, in a time trial bike like my P3, the thick chain stays and aero fork make positioning the sensors a little tricky. Nevertheless, a little trial and error was all that it took to get them just right. The computer head has an interesting design with a long thin neck and a pivoting point at the end of it. From the diagrams it looks to me as it was made strictly for a set of conventional road drop bars with round tubes. This annoys me a bit since the number of bikes that are sold in the market with aerobars these days is significant enough not to be ignored. After a little more playing around and with the installation of the ever useful $10 Issimo “knob” on the aerobars, I was actually able to get a really good mounting position (centered between the aerobar pads, in line with the base bar). I still feel manufacturers can come up with a mounting system that allows for multiple positions vertically and horizontally, for all types of bars and set ups (a little more like the Cat-Eye Strada) but in this case I was happy enough with the end result. Programming the units was simple with the instructions provided.

On the road the Wintech FS computer and Cadence unit is reliable and easy to use. The digits are big and easy to see, even though the computer head is small and sleek in size. It displays your choice of current, average and max speed on the top in really big numbers, your cadence in the middle in medium numbers, and your choice of distance, time, odometer and clock at the bottom in smaller and yet still visible numbers. Both buttons control what you see, which was a little awkward at first but easy to get used to. The unit also starts and stops itself automatically, according to whether the wheel and cranks are moving or not. Finally, the FS Computer gives the rider up to 9 intermediate stopwatches and 4 odometers (Bike 1, Bike 2, Trainer bike and total). Reliability was great. At no point during my rides did I ever lose a signal and the speed, distance and cadence were accurate and stored at the end of the ride.

Bottom line is that these devices are reliable, easy to install and use. In a way, I wished that they used the Ant + technology to allow for future automatic transfer of data between other GPS, Heart Rate Monitors and Power meter units, but for the user looking for the basic cycling functions, this is certainly not an issue. With the Mavic Wintech FS Computer and Cadence unit, riders no longer have to choose between wireless and cadence and they also don’t have to spend a fortune to get both.