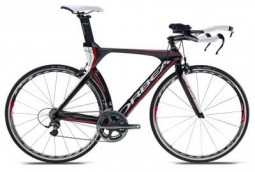 When thinking about European bike brands, Orbea is not always the first to come to mind. However, the company has been making bikes since the early 1930s, almost 20 years before some better known brands like Colnago and Pinarello. Unlike most of the other European brands that are imported into the US which come from Italy, Orbea comes from Spain. In fact, most company employees would quickly point out that they hail not from Spain but from the Basque Country, which is located in the Pyrenees Mountains, bordering France.  This region is home of a fiercely proud and independent people and due to the terrain and their love of cycling, has produced some of the best climbers in the world.

Orbea is the largest manufacturer of bicycles in Spain. They have supplied bikes to the Euskaltel-Euskadi pro tour cycling team as well as to Sammy Sanchez who rode an Orbea Orca to Olympic victory in Beijing. Orbea’s time trial bikes have seen a steady climb in popularity over the years, peaking at 6th place in the Kona bike count in 2010.This was largely due to the Ordu frameset, which was ridden by Craig Alexander to victory at the Hawaii Ironman in 2008 and 2009. Since then, the Ordu (which for 2013 will be known as the Ordu Silver, SSJ or SDR) has been somewhat overshadowed by the introduction of superbikes by competitor brands, such as the P5, the Shiv and the Plasma Premium. New for 2013, Orbea will be introducing the Ordu Gold series to the line. With this new Ordu Gold, the Silver has dropped in priced thus making it more affordable for the masses.  How good is this bike still? Is it a good deal or ancient history? I had a chance to ride it and decide for myself.

Orbea, like most companies making carbon bikes these days, blend high and mid modulus fibers in order to achieve different strength, weight, rigidity, etc in different parts of the frame. Generally speaking, high modulus fibers are lighter weight and more rigid but also in turn more brittle. Therefore a higher percentage of high modulus fibers in a frame normally results in a lighter, stiffer bike. However, no bike is made entirely out of high modulus fibers, or hitting a pothole could result in a catastrophic failure (remember the brittleness). Hence the need to combine different fibers based on where they will go on the frame. Again generally speaking, higher concentration of high modulus fibers mean more expensive frame, due to material costs, and labor and design complexities. With most of its frames, Orbea uses  the same overall shapes but different blends, depending on whether they are making  the lighter, pricier “Gold” or the more affordable and yet durable “Bronze” version.  Orbea further customizes their carbon fiber outlay depending on the sizes of each model. This innovative concept  called size specific nerve, is designed to provide a similar ride across sizes since they appropriate tube dimensions respective to rider’s anticipated body mass index, size, etc.

The  Ordu SSJ uses a silver level frame. I found the ride to be smooth and the acceleration quick. I like bikes that are really stiff laterally and that shoot forward when I pound on the pedals. The Ordu performed well in this aspect, more or less on par with a Cervelo P2 and stiffer than a Felt B16. However, it was not quite stiff as my P4. Note that this was my guy feel since I did not put the frames in a torque machine. The Ordu also cornered well and felt stable when riding on the aerobars. Out of the saddle it was solid and responsive.

All Orbeas use a monocoque construction, which essentially means that the frame is the result of  a one-piece structure. Each tube is connected to the next with continuous fibers, even through the junctions. This is supposed to make the bike more reliable by spreading out the forces over the entire frame.

The overall design of the Ordu is a curious blend of features that appear to address aerodynamics stiffened and aesthetics in different areas.  Its hard edges and unorthodox tubes (such as the triangular and quadrilateral cross-section top tube) give the Ordu an artistic look. The big cutout (Cervelo P3 like) on the seat tube and slightly pointed head tube screams aerodynamics. The way the top tube and down tube are overlaid onto the head tube and the substantial seatstays project stiffness. This multi focus approach is quite visible and it first can appear a little disjointed. However, this unique look quickly grew on me, which seemed to be the reaction of most of customers.

The fit of the Ordu was originally a bit troublesome but was fixed with a new seat post option. Based on its “stack” and “reach” the Ordu frames fall somewhere between the “long and low” category and the “tall and narrow” category. This actually works well in fitting most people, since the Ordu’s geometry is neither too low nor too high on the front end, nor does it extend to far forward in front of the bottom bracket. The problem though lay in the saddle position with the straight post. Probably due to its focus and experience in the pro peloton and its UCI restrictions, the geometry and straight post placed the saddle at a 74-76 degree. This caused the hip angle of most triathletes to be too tight while their arms were over-extended. The new, forward position seat post allows the saddle to be positioned in the 78-80 degree range, which works better for most amateur triathletes in opening the hip angle and providing greater comfort for the rider in the aero position. I personally had no issues finding my desired position with a size 54. With the forward position seatpost, the Profile ZBS aerobars with low armrests and no spacers under the stem, I was able to mimic exactly my position on the P4 (also size 54). Available in a 48, 51, 54, and 57, the Ordu fits most riders, except the really tall ones. The Silver also comes in two color schemes for those who like choices: white/red (and black carbon) and white/silver (and black carbon)

The 2012 Ordu SSJ was originally priced at $3499, and included a mix of Shimano Dura Ace and Ultegra components. The price has since dropped to $2499, making it a steal. The parts package is functional and well thought out. The FSA Gossamer cranks and off brand brake calipers are on par with most bikes in this price range but the Dura Ace brake levers, and Profile OZero base bars (paired with the Profile ZBS TT aerobars) are certainly nice and unusually expensive touches. I can’t really say that there is anything I would rush to change. Even the Selle Italia SL T1 (triathlon specific) saddle wasn’t too bad for a stock saddle. For 2013, the SSJ will get a further price drop to $2299 but the derailleurs will be changed to Shimano 105 and the crankset to a Zeus (Orbea’s brand) Carbon. Considering that the rest of the specs will remain the same, and the crankset will now be carbon (often an upgrade), it is still a good deal . For those who really want the name Ultegra stamped on their derailleurs, your local shop should be able to upgrade them for around $100-$150, making it still less than the current sale price.

So what’s up  with the 3 letter model nomenclature? Personally, I’m not crazy about Orbea’s love for acronyms. In fact, I’m still trying to completely figure some of them out but the first letter determines the level of the frame (Gold, Silver or Bronze) while the next two letters determine the component group. Therefore an Ordu SDR is has a Silver frame and Dura Ace components. An Ordu SSJ has a Silver frame and I guess a blend of Shimano components. The new Ordu GLi2 has a Gold frame and Ultegra Di2 Components, and so on.

With the new 2013 Ordu Gold (new blend fiber but also new shape and design) coming out, a lot of Orbea’s focus will be on the new bike. Nevertheless, the Ordu SSJ will now be positioned to attract a larger audience. Its lifetime warranty, functional package, ride quality, unique look and aggressive price, are all the right ingredients for more sales. The Ordu SSJ has been a little bit of a sleeper these past couple of years as perhaps the majority of triathletes have not been familiar with its attributes and with the Orbea brand itself. With greater advertising and more aggressive promotions in the near future, the Ordu SSJ will surely not be such a well kept secret in 2013.