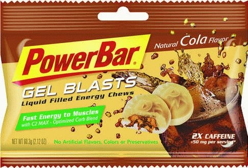 PowerBar, now owned by Nestle and the heavy hitter in the endurance sports nutrition market, has recently introduced the POWERBAR® Gel Blast. This product falls in the category of bite size nutrition, designed to give athletes small doses of energy in a solid or partially solid format. Products like Cliff Shot Blocs and Sharkies have grown popular with athletes wanting to chew something during endurance events, instead of squirting a pasty substance in their mouths. POWERBAR® Gel Blasts are essentially soft, slightly chewable bite size semi circular globs filled with liquid in the middle. I think the name and the tag line (“Bite thorough the soft outer shell to the liquid center and get a blast of energy”), sounds a little like a product advertised during Saturday morning kids shows but I actually did like the product.

As I mentioned in a previous review, I like the concept of a bite size nutritional product. However, some products out in the market that have the consistency of gummy bears are too chewable for certain situations while others, are too crunchy to be effective. Too much required chewing can interfere with breathing during intense exercise and having to pick stuff out stuck in the teeth is distracting and annoying. The Blasts are softer and practically dissolve into smaller pieces once in the mouth. If you chew it, it breaks up immediately releasing the inner liquid, which providing an additional refreshing taste.

POWERBAR® Gel Blasts come in a pack with 9 units for 190 calories. Therefore, each unit has approximately 20 calories. PowerBar says that taking 6 single units are supposed to be equivalent to taking 1 gel pack. Formulated with a ratio of 2 to 1 glucose to fructose carbohydrate sources, Powebar quotes research that suggests the Blasts increases delivery of energy to the muscles by as much as 20% over glucose alone. With 0 g of fat, 45 g of carbohydrates and 3 g of protein, the Blast are designed to deliver energy quickly. It also has 30 mg of sodium for some electrolytes and it contains no artificial flavors, colors or preservatives. The Blasts are available in two flavors, Natural Lemon which is non caffeinated and Cola, which has 50 mg of caffeine (the equivalent of half a cup of coffee).

I liked the POWERBAR® Gel Blast from the first try. It had a weird consistency at first but most important, it was easy to eat and swallow. I tried eating them while riding first and then while running and experienced no negative issues at all. I liked both flavors, although most others who I offered them to definitely preferred the Natural Lemon. The cola has a little bit of an after taste so you either have to get used to it or you really have to like cola, like I do. I found the pack a little too big to carry in the small pockets of a tri top but they were fine for a bike jersey pocket. The easy to open and re-sealable feature in the packaging itself (a simple piece of tape already included but that still does the job) were nice features introduced by PowerBar. Nutritional products made to be taken on the go that are impossible to open drive me crazy while other products that once open require a zip lock bag create inconvenience and waste.

The POWERBAR® Gel Blasts are the latest addition to PowerBar’s vast arsenal of sports nutritional products. As a during exercise source of energy, they are a good alternative, or for me, a nice complement, to gels. I sincerely hope that they will be successful for PowerBar in order to avoid the fate of the Recovery Shakes, another product that I really liked and that is no longer made.