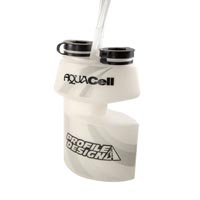 Aero drink systems have been around for 15 years in the triathlon market and have been widely accepted by pros and age groups alike as a convenient, aerodynamic way to carry and intake liquids on the bike. Recently, an entrepreneurial ironman athlete, Sue Robinson, took that a step further by developing the Podium Quest Revolution Hydration System.  This was the first aero hydration system to allow the user to carry two different kinds of fluids in two separate chambers. You also have to give Podium Quest, a small start up company, credit for developing and marketing a working product based on a new twist of an existing concept. Profile Design, maker of aerobars, handlebars and numerous other bike related products, this year introduced its own version of a dual chamber aerobar mounting drink system called the AquaCell.

With the main chamber holding 27 oz of liquid and a secondary chamber holding 17 oz, the AquaCell holds an astonishing total of 44 oz of liquid. It uses the same sleek shape and functional design of the standard “Aero Drink System” and just like the Aero Drink System, it mounts between the aerobar extensions. In the narrow mounted aerobars, it simply slides in between the extensions while the wider mounted ones require Profile’s Universal Aerodrink ™ Bracket. It now comes with a neater non-splash plastic cap that enables refilling from a narrow mouthed bottle and with the standard yellow mesh that allows refilling from plastic cups and other forms of containers.

The appeal of the aero drink system is simple…convenience and aerodynamics. There is no disputing that allowing the rider to suck liquid from a straw on a front mounted water bottle and allowing him or her to refill on the go is convenient. It appeals to riders who are not comfortable grabbing water bottle from the down tube while riding and to those who forget to drink unless they have a straw in front of their face. Aerodynamic tests have also shown that depending on how the bottle is mounted in relation to the rider’s hands and arms and on the type of aerobars used, that it can actually be as aerodynamic as no bottle. It can certainly be more aerodynamic than the bottles mounted elsewhere. According to wind tunnel experts, the problem is the straw that sticks out on top of the bottle and causes all kinds of little turbulence. Considering how small that can be and that it sits in front of the rider’s face, I’m not sure how big a deal that is though. Yet, another aero dynamic advantage can result from the fact that the rider can drink while staying in the aero position. More on this later though.

With all that being said, I am not a big fan of the Profile AquaCell. I guess that my main complaint is its bulkiness. Besides looking huge and a little out of place on aerobars, it actually does take a lot of space in that general area causing a few issues:  First of all, it can interfere with the signal from wireless cyclocomputers and cadence units, depending on how and where they are mounted. Next, it can actually interfere with hand position on the aerobars, especially if the aerobars are on the short side. I like to slide my hands back on the extensions when I climb and the big unit gets in the way. Finally, the AquaCell makes mounting a cyclocomputer, a heart rate monitor or a powermeter screen quite a bit trickier.

At 210 grams, it is not very light. Triathletes will spend $1000 to save half of that on wheels. Remember that the weight given is for the empty bottle. Full of liquid it can weigh as much as 3.5 lbs. That may not count as “additional” if you factor that you would be carrying that weight in liquid elsewhere on the bike, but it is the fact that it concentrates all that weight in the front end and high on the bike that causes a problem. That shift in weight makes the bike less stable and affects the way the bike handles on turns and how it behaves during mounting and dismounting.. The rider using the AquaCell should definitely be aware and should practice riding with the unit in order to get used to it.

When it comes to the aerodynamics of the unit, I’m not totally sold either. It does seem to have some of the same aerodynamic properties of the Drink System but now it has two straws sticking out of the top, beside the fact that the sheer size often makes it hard to mount cleanly on the aerobars, especially with cyclocomputers, powermeter and GPS screens. Also, as far as the advantage of drinking in the aero position, some of that will be negated by the fact that the rider has to spend so much time in the non aero position refilling the two chambers. Plus, in longer races, a rider will often move slightly within the aero position or even from the aero position in order to stretch or reposition anyway, that staying 100% of the time is not necessarily crucial or even realistic. Grabbing a bottle from the down tube or from behind the saddle is not that time consuming and in sprint races, just water or Gatorade is often enough for me.

The bottom line is that I just didn’t like that big of a bottle in the front end of my bike, and the benefits were not significant enough to overcome that. Customers who purchased the AquaCell did say they liked the convenience of sucking two different liquid without having to move their hands or body. Also, for triathlon equipment standards, it is not very pricey. As a result, I can see how the AquaCell can be useful in those situations where you will only need 44 oz of liquid so one unit would be enough to last the entire race or for those who don’t feel comfortable drinking from a regular water bottle while riding.