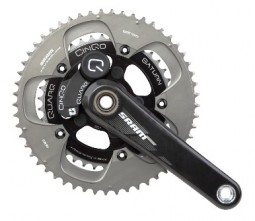 During the last few years, using “power” to gauge performance and measure effort when cycling has become increasingly common. One cannot watch a stage of the Tour de France without hearing the commentators and experts discuss the power outputs of different riders. Coaches are writing training plans based on “power” and among techies and cyclists on the peloton, the talk often revolves around “watts”. First used in cycling in the eighties by pioneers such as Greg Lemond, training and racing based on power has really only taken off in the last decade. This is mainly due to the fact that it took years for the technology to develop and for devices capable of measuring power to become small and light enough to attach to a bike, and accurate enough to be useful.

“Power can be described as the amount of work done or energy released in a measured time frame, normally expressed as a watt.”[1]

Manufacturers have taken different routes on how to attach these power measuring devices, known as powermeters, and how to actually measure power. Most mobile powermeters, like Quarq, Powertap and SRM, use something called strain gage technology, which measures in a very controlled way how certain areas flexes in specific locations when load is applied. They calculate torque and analyze angular velocity to come up with watts generated. Others measure power “through handlebar-mounted units that utilize the principles of Newton’s Second Law by measuring a cyclist’s opposing forces (gravity, wind resistance, inertia, rolling resistance) and combining these with velocity to determine the rider’s power output.”[2]

Quarq, as mentioned above uses the first method It attaches the powermeter unit to the  crank to the measure torque in the drivetrain of the bicycle.  Quarq is actually the name of the company (recently acquired by SRAM) while the powermeter system is called CinqQo. The Quarq CinQo is basically a special “crank spider” that includes conventional 5 arms and then sensors, a replaceable CR2450 battery and other instruments, attached to a ring called the “Ring of Saturn”.  It includes 20 strain grids and 10 gauges in a proprietary arrangement and comes in several different variations in order to fit different cranks. The CinQo can currently fit specific crank models from SRAM, Bontrager, TruVativ, FSA, Rotor, Cannondale, and Specialized. Note though, that it does not fit all models from each of these manufacturers. For specific compatibility questions, please go to www.quarq.com. It is also available for compact versions of most of the crank brands mentioned.

The Quarq CinQo can be purchased with the crankset and rings (the most common manner), or by itself, in which case the crankset has to be sent to Quarq for proper installation and calibrationThis can take up to a few weeks with the exception of a couple of cranks where this can be done at the bike shop level.

In order to view and record the power, the rider then still needs a device capable of receiving the now common ANT + radio transmission. These devices may be watches or cyclocomputers, such as most Garmin models, the iBike IAero, the Specialized Speedzone Pro, the Bontrager Node and the CycleOps Joule.

I started integrating power in my training a couple of years ago, by using a Computrainer (which offers electronic controlled load and power readings for a stationary bike)[3]  I quickly saw the benefits of measuring effort, in a way that related a little more to legs (fatigue and strength) than just heart rate although I did see a direct correlation with heart rate in terms of overall effort. I immediately enjoyed the feedback and goals that power measurement offered. In fact, it was so much so, that I found myself doing some of my hardest workouts indoors, even on nice days, trying to hit my target wattage. Eventually I decided to bite the bullet and get a mobile powermeter for my bike. I chose the Quarq CinQo primarily because it was crank based (more on this later) and it was less expensive than other models in the market. I can honestly say that it was money well spent.

Like the Computrainer, I found that the Quarq CinQo was extremely useful in pushing me harder on the hard days, and helping me with pacing on the long days, but, was now free to ride outdoors. On my interval days and time trial days, having a target number (wattage) made me work harder than I ever would without it. And because the measurement of power is not affected by the terrain or the wind, I could do workouts on different courses, depending on the circumstances. For pacing, the average wattage function was crucial. After talking with my coach, we determined that my goal wattage for IM Louisville was 230 watts. Based on a lactate threshold test, that goal wattage should have put me close to the time I wanted to hit and still be able to run. My actual wattage was 232 and I rode a 5 hr and 11 min for a 112 mile rolling hills course. More importantly, I was able to run a 3:37 marathon resulting in  a solid, well executed race. A few weeks later, I went into IM Hawaii with the same plan. There  I then averaged 234 watts and rode  5 hsr and 10 min on the  112 mile windy, rolling course. My 3:48 run was not quite as fast but still good for a hot day. I attribute much of my overall success at both of these races to sound pacing on the bike, made possible by the powermeter. It was nice to be able to push hard enough and know that as long as I was averaging close to my goal, that I was not overdoing it. It was also comforting to know that I had to slow down if the numbers kept creeping up higher than the desired goal.

Regarding the unit itself, I liked the Quarq CinQo for several reasons:

Getting a powermeter is still a significant monetary investment. Purchasing the SRAM S-975 crankset along with the Quarq CinQo powermeter will run over $1800. However, my experience is that it can be an invaluable training and racing tool.  I will say that if one is willing to make the investment, he or she should be willing to do some research on how to use power, or should talk to a coach who has experience with it. Like everything else, it is only a good investment if used purposefully. And if that commitment is made then the Quarq CinQo is a reliable and easy to use powermeter.