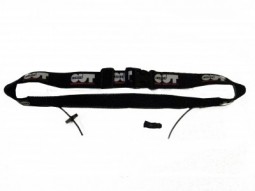 Not all race belts are created equal, despite what most triathletes think. This is one of those products that have become a must for every triathlete. It is one of the first purchases novice athletes make. One that many make on the spot at packet pick up when they cannot find the one they thought, they had in their transition bag. Yet, manufacturers seem to have put little thought into improving them over the years.

Race belts are basically a belt around 1 inch thick, generally made of an elastic type of material where the actual Tyvex race number can be pinned to or snapped onto. The origin of the race belts date back to the late eighties. From the very beginning, triathletes realized that getting the Tyvex number somewhere onto their clothing during activities such as swim, bike, and run was problematic. These big rectangular pieces of paper would not lie flat and create drag no matter how one pinned them. In addition, having them pinned on during these two activities also increased the risk of having the numbers rip off, causing time penalties and even disqualification. As a result, most, even the pros, chose to pin them to a looser fitting type of singlet that they would grab in T2 and put it on during the beginning of the run.  However, the pinned number still often got tangled as the athlete struggled to put the singlet on with a wet torso and trying to run at the same time. Furthermore, as better fabrics (slicker and more wicking) were introduced, and as sponsors wanted their logos on athletes during the swim and bike portions as well, putting on singlet only for the run became unnecessary, even undesirable. So how could one get the number to the athlete’s waist in a quick, easy way? The answer came in the form of the elastic band from someone’s old pair of tidy whitie underwear. Seriously!

The early versions of race belts were simply elastic belts. Regular safety pins were used to attach the numbers. The introduction of a plastic buckle to the elastic band allowed the athlete to circle the belt around the waist and fasten both ends together. Also, by making the belt adjustable to the different waist circumferences, one size could fit all athletes. Eventually, two snap on “buttons” (that would snap on the paper numbers themselves) were sewn on the belts to eliminate the use of safety pins. Then, except for color changes and logos, the so called race belt remained virtually unchanged for the next decade.

Nineteen, a Canadian company that manufactures wetsuits, recently introduced a new race belt that immediately caught my eye. Instead of snap-ons, they use lace locks to attach the number to the belt. Next, instead of using a belt made entirely of an elastic material, this belt incorporates nylon webbing to the elastic belt, at the portion of the belt where the paper number slides in. Finally, this belt is available with the option of including 6 loops that can be used to attach and carry gel packs when used in longer races.

I never liked the snap-on system for attaching the race numbers, so the lace locks were a welcome change. My experience with snap-ons, is that they would often pop out during the race, causing the number itself to dangle or even come loose. On other versions, the snap-on top button fit so tightly, that it became a huge struggle just to take it off in order to get the number on. And when it did finally come off, it would fly off into obscure places, increasing the aggravation even further. With the lace locks, this is no longer an issue.  Sliding the lace locks off the thick, round short string pieces sewn into the belt is quick and easy. The other issue with standard belts is that due to the elasticity of the entire belt, it took a little practice to figure out how taut the belt had to be when snapping the number on. If this was not taken into account, the belt would expand when placed around the waist causing the snap-ons to pop out or causing the number to wrinkle or fit improperly. With the non- stretchable nylon webbing, strategically located where then Tyvex number is placed, this is no longer the case. The portion of the belt will always be as long as it is when the number is placed. Different size numbers are accounted for by the elasticity of the strings where the lace locks are placed, and by how far into the strings the lace locks are locked in place. This actually worked better than I had anticipated when I first saw the belt. The gel loops option is also a nice touch, although this increases the cost of the belt by a couple of dollars. For those who don’t like to race with tri tops, tri shorts, or skinsuits with pockets, and who are looking at competing in longer races, using this belt is probably the simplest and most cost effective solution to transport some nutrition.

I like the fact that Nineteen focused on a useful and simple product that had been around forever, that had some great attributes but some definite flaws as well and made some significant and functional improvements. And as a bonus, they kept the price at the same level as others in the market. Would I recommend rushing out and purchasing a new race belt if you already have 3 or four scattered around the house? I’m not sure…It is certainly not a necessity, as the other still work fine. Nevertheless, I bet that next time you try to snap on your race number 15 minutes before the race and the snap on top button flies away into oblivion, you will wish you had spend the additional $9 for one of these new race belts. If you do however need a new race belt, make sure you look for this one.