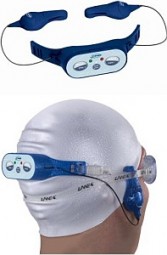 When considering new products to review, occasionally, I find myself drawn to products that I have reviewed before but are now available in a new version. New versions can be radically different, more advanced or essentially the same with a few cosmetic changes. Electronics tend to fall into the first of these categories since new technology make such products smaller, more powerful and longer lasting. FINIS introduced the SwiMP3 about 2 years ago with moderate success. I liked the product then, although I found it to have some limitations that prevented me from using it everyday. The latest generation of the FINIS’ SwimP3 player is the v2, so I decided to put it to the test.

The first and most obvious change from the original unit is that the v2 does not have the bulky control panel and body, which also housed the rechargeable battery unit and USB port. This piece rested on the back of the head separate from the ear phone pieces and connected by waterproof wires. The v2 eliminated that piece. The control panel is now imbedded in one of the ear pieces and the only thing that drags behind the head is a cord connecting the two ear pieces and a small USB connector. The ear pieces, which are actually small speakers that vibrate to emit the sound waves, are still no bigger than the ones on the original version. This is a tremendous improvement as it allowed me to keep a more efficient head down position in the water, without the drag forcing the unit backwards toward my neck. Additionally, with the old version I had trouble keeping the unit in place during the push off the walls when not wearing a swim cap. With the v2, I can tuck my head down and push hard and there is nothing to slide off.

The second big improvement is how the unit hooks up to the goggles. In the past, it involved an elaborate routing through the ear pieces as well as the control panel. This often required the full removal of the straps on one side of the goggles. On several models of goggles, this is a complete pain. With the v2 version, each ear piece has a routing slot that can be opened to allow an easy and quick inward slide of the strap.

The control panel also works better on the v2. The buttons are raised and therefore much easier to press, especially when you can’t really see with the goggles on. I guess for simplicity and to reduce the number of moving parts that needed to be sealed, each button serves multiple purposes. These include the basic functions of an MP3 player, like volume control, shuffle, next/previous song, pause and reset. This was at first a little confusing (for those of us who are used to several different buttons and sliding bezels on non water proof electronics) but easy enough to figure out and get used to.  The on light could be a little brighter (greenish light on a blue background inside a blue pool is not easy to see) but after a few seconds the music pretty much tells you whether the desired button was pressed.

The v2 continues to use their original bone conduction technology. This is the direct transfer of sound waves through the water, through cheek bone and finally to the inner ear. When the ear is underwater, as is the case during swimming, water blocks the ear canal thus interfering with sound waves, resulting in a muffled sound. Bone conduction essentially bypasses the air conduction mechanism, providing the swimmer with a clear and crisp sound. This really works and it doesn’t require an earpiece to be constantly inserted inside the ear.

Importing songs was just as easy as any other MP3 player I’ve used. The battery is again recharged via the USB port and now when fully charged can last up to 8 hours. The v2 has 256 Mb of memory which holds roughly 60 songs (in comparison to 128 Mb in the original version). This may not seem like a lot by today’s standards but it was more than enough for the amount of time I normally spend swimming.

The SwiMP3 v2 is a sleek improvement of an original product that was limited by the technology of the time. As much as I liked being able to listen to music while I swam, with the original SwiMP3 I found that I could not use it on the hard sets. It also required having additional goggles for racing and for the days I did not want to use the SwiMP3. Now, with the release of the SwiMP3 v2, all those issues are gone. My stroke is no longer hindered by equipment and I can listen to music during all swim work outs. I once again look forward to going to the pool. The lower price tag of $150 (half of the original version), is a small price to pay to swim more in 2009.