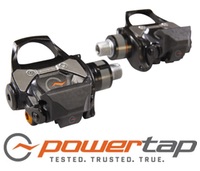 Why Power, Now
& Why Powertap P1

Working at Inside-Out Sports for the past few years I have heard a lot of discussion surrounding power-based cycling. For awhile I only ever truly thought about it when customers were bringing in their bikes to tell me that their powermeter was not working or their Garmin was not reading their power. I learned more about syncing and troubleshooting the equipment than I did about what the readings actually meant.

This year I decided I wanted to race an Ironman. I have completed Ironman races in the past but I would not say I went into them with a “racing” mindset. I knew I needed to rethink my training and one of the first areas to consider was power-based training. En route to my last Ironman finish I did I did not even use a cycling computer, but instead had a Timex watch that I looked at to tell me when to eat and/or drink. I had a basic time I knew I wanted to be off the bike so I just aimed for an easy way to complete the distance but I knew this would not be the optimal way to get every second out of my training and every ounce of potential out of my body.

This year I put time into figuring out why power was important and how it could help me. I was at an advantage over other people that are curious about power as I work at a store and train with people that having been using power for as long as powermeters have been available to cyclists and triathletes. The easiest explanation for me came from an employee of our Charlotte store: the formula for power is your force times the distance you go divided by the time it takes you to get there which in a nutshell is a very accurate measurement of the work you are doing.

With a basic bike computer you can measure your speed, cadence, heart rate and distance covered. All of which is great information but in order to really measure the work you are doing in terms of watts you are putting out you need a device on your bike that can measure power.  My first foray into the power market was with a trainer that was equipped to read my power output via “strain gauges” in the trainer itself (the same way all powermeters read watts). It was winter and I knew I would be spending a good deal of time on my trainer and I wanted to make it as beneficial as possible.  I was amazed with the progress I made within the first few weeks. I had spent numerous winters toiling away on trainers with nothing to do but watch Game of Thrones while monitoring my cadence and heart rate. There are tons of “ apps” now that you can use with power trainers that let you set up training sessions or even virtually race friends and pros whether they are next to you or across the world. The trainer automatically adjusts tension based on what you are doing. I was able to do several FTP tests and even race the bike course of my impending Ironman.  Upon hitting the road once the warmer weather hit I realized that my cycling was stronger than ever due to the  quality of training I was able to put in on my power-based trainer.

Once the warm weather hit and I took my bike outside and consequently away from my power-trainer, I realized I missed knowing my specific power output was. I was training using cadence and heart rate and speed as my metrics but I did not feel that this was a good overall picture of the work I was doing after spending all winter training so specifically. All of these measurements are easily influenced by external factors such as wind, fatigue, road conditions; where a power reading truly tells you the effort you are exerting.  I decided I needed to figure out what powermeter I wanted to use on my bike so I could have this information while riding outside.  Several factors went into my ultimate decision. The biggest one for me was the fact that I have 2 bikes that I use regularly. I really did not want to have a powermeter on one and not the other. Luckily several companies have developed a pedal based powermeter. The Garmin Vectors had been on the market for a few years and I knew that Powertap was getting ready to release their own pedal.  After reading a few articles about both options I opted for the Powertap P1 pedals.

One of the main reasons I picked the P1 pedals was that they are truly very easily swapped between bikes and are compatible with any crank on the market. I also knew that Powertap had always been at the forefront of the power market since they started building hub based powermeters into rear wheels decades ago. Installation of the Powertap P1 pedals is remarkably easy as it is the exact same process as installing most pedals available on the market today. No pods, angles, spacers, or anything funky is necessary when installing the P1’s. My first ride with them I did get an error message on my Garmin saying that the right pedal could not be found. This concerned me, but at the end of the ride my power looked accurate. I had demoed a set of Garmin Vector 2’s we had at the shop while I was waiting for my P1 pedals to arrive and the only time I got that error message was when I accidently ripped the sensor off the pod on the pedal.  I emailed customer service at Powertap and quickly received a response with an explanation that the way that Powertap pedals speak to the Garmin is that the right pedal sends the info to the left pedal which then sends it to the head unit. Because Garmin is expecting to have information sent from both pedals as it does with the Garmin Vectors it assumes it is missing the right pedal sensor. Powertap said I could just ignore the message and assured me that the power reading would be accurate. They were correct. I could see both my left pedal and right pedal power reading on Garmin Connect. This is another feature that is beneficial in pedal based power meters. I can see how balanced my pedal stroke is as well as my strokes “smoothness” in both legs.

I have now been riding with power on my bike for a little over a month. It has definitely helped me become a smarter and better cyclist. In an Ironman it is not about cycling as fast as you can because you also need to factor in having to run a marathon after getting off the bike. It’s about cycling as SMART as you can. Using power is helping me to realize that sweet spot of effort that I need to stay in to be able to get off the bike and have the energy left to put in a great run. When training with just heart rate or speed it is easy to get discouraged when you look down and see your speed is at a crawling pace but your heart rate is racing. You start feeling that maybe your fitness is slipping. With the power number visible you can see that third factor of how much effort you are truly exerting.  It is a better overall picture of your cycling fitness but also a great tool to use in order to improve. There are many products on the market that make the bike faster, but power is a tool that makes the engine faster and therefore performing at its best when its needed most!

In summary, power is great because it makes me a more efficient and smarter cyclist, both while training AND racing. I think the Powertap P1 pedals are a great option because they are extremely simple, reliable, accurate, and very easy to swap between bikes.