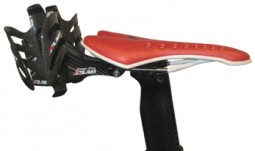 A behind the saddle water bottle carrier is one of those pieces of equipment that has become a necessity for triathletes, especially if they are racing Olympic Distance or longer events or training in hot places like North Carolina. Most time trial frames these days only have room for one water bottle cage, either on the down tube or seat tube and that is just not enough water carrying capacity. The concept of a behind the saddle water bottle carrier is simple but over the years we have seen that designing one that is sturdy enough not to break or come loose, that does not severely increase air drag, that will clamp and install easily and that will still give us room to carry all the other stuff we need (such as tubes, tools, CO2 cartridges) is a significant challenge.

The Carbon Wing (Aerodynamic Carrier) has just been introduced by XLab USA. With more carrier options than any other manufacturer and with a long history of designing and manufacturing such devices, XLab has addressed all of the issues raised above. XLab was founded and is currently headed by industry veteran Craig Turner. After founding Nytro and successfully running it for many years, Craig has recently sold the triathlon store and has focused his design experience and resources on XLab. The result has been more and better products, faster production and better distribution to the dealers. The fact that Craig has worked closely with not only professional athletes but also age group athletes on the retail floor, is a tremendous advantage. He knows well the installation issues we often face in the shop with these water bottle carriers and how the ease of reach is as important to most of us as the aerodynamics is for the pro.

The Carbon Wing, as the name suggests, is made out of (aerospace) carbon fiber composite and uses a special resin to make it more resistant to twisting and cracking. Since most time trial bikes now use aero shaped seat posts that are different among models and brands it conveniently attaches to the saddle rails  The mounting, like most others in the market is still a little tricky, however, the Carbon Wing does come with some custom made aluminum spacers that protect the carbon fiber when tightening the hardware.

Regarding aerodynamics, the Carbon Wing mounts and sets the bottles slightly higher in relation to the saddle than other carriers (but still not as high as the older XLab Saddlewing). The thought here is to maintain the airflow around the rider’s back past the bottles while at the same time avoiding disturbing “clean” airflow from aero seat posts. Data from testing done by John Cobb at the Texas A&M wind tunnel suggests that the Carbon Wing produces on average .08 lbs less of drag than a low-mounted carrier, which translates to a savings of 1 minute on an Ironman distance race.

The two greatest benefits of the Carbon Wing are its versatility and the amount of storage room it offers. The wing has multiple holes allowing for the bottle cages to be mounted close to vertical or tilted, based on rider’s preference and back shape. I mounted them tilted, since I’m not very flexible and therefore have a hard time getting my leg over the vertical bottles when mounting the bike. I was afraid that this was going to make the bottles more likely to be ejected, but that has yet to happen…and I have ridden over quite a few railroad tracks.  Although the Carbon Wing allows for a third cage to be mounted if desired, XLab suggests using 1 or 2. I tend to agree that carrying 3 cages in a behind the saddle carrier is not very advisable since the weight of three full bottles is just too great. This could contribute to the carrier coming loose while riding and will undoubtedly further affect the overall weight distribution of the bike. The third cage mount option will work well for those looking to mount just one additional bottle and would like that to be centered.

The space for storage in the Carbon Wing is a great improvement over other models. We all know how big a pain it is to try to fit a saddle bag or other things on and around rear carriers. The Carbon Wing has a small space inside its structure that is big enough for a small bag, tubes and cell phone. I was even able to fit a tightly folded tubular tire for Ironman Coeur D’Alene. Next, it allows space for a bigger saddle bag to be strapped below the structure, using either the bags’ own straps or XLab’s XCW-straps, which are included with the Carbon Wing. Finally, the Carbon Wing is compatible with the X-nut, which easily attaches to the back of the carrier creating an accessible and simple place to screw on CO2 cartridges and adapters.

At 55 grams (without the hardware), the Carbon Wing is as light as other carbon carriers in the market and lighter than most alloy ones. While being a pricey $119, it is on par with other carbon carriers.  However, when trying to figure out how to carry everything we need for a long ride or for an Ironman race these days, having a well designed and versatile behind the saddle water carrier is well worth the cost. The Carbon Wing definitely fits that bill.